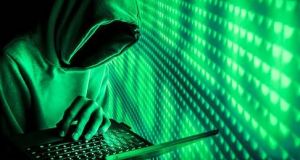 The cyberattack was claimed by a group called Hackers of Saviour. It targeted websites hosted by uPress servers, allowing it to replace their content with anti-Israeli videos and links. Photograph: Getty Images

Two Israeli-Ireland websites were hacked as part of a worldwide cyberattack on websites with Israeli themes.

The Ireland Israel Alliance and the Ireland Israel Business Network were both replaced on Friday morning by a message which read “the countdown of Israel destruction has begun since a long time back”.

It included links to websites which showed the Israeli cities of Tel Aviv and Haifa being bombed.

The cyberattack was claimed by a group called Hackers of Saviour. It targeted websites hosted by uPress servers, allowing it to replace their content with the anti-Israeli videos and links.

Ireland Israel Alliance executive director Jackie Goodall said she has been informed by uPress that the hackers were Iranian.

She said the timing may be to coincide with Quds Day, officially called International Quds Day, which was set up by Iran in 1979 to express support for Palestinians and oppose Zionism and Israel. It is held on the last Friday of Ramadan.

“We are associated with the website, and it was a pretty nasty one. When you logged on to our site there was a message that we should be ready for a big surprise. It was pretty scary and pretty weird that they should be targeting sites in Ireland. We have been pretty shock up about it all day.”

The site was restored to normal after 15 hours.

The Ireland Israel Business Network commented on its Facebook page after being targeted. “And we’re back! Our website was hacked this morning, caught up in a massive (apparently Iranian) cyber attack on Israeli and Israeli-themed websites. How do you say ‘that’s very naughty’ in Farsi?”

Multiple websites in Israel were also the target of this Iranian cyberattack.

Hackers of Saviour’s YouTube channel describes them as hackers set on avenging Israel’s treatment of Palestinians.

The Israel National Cyber Bureau confirmed that thousands of websites in the country were attacked.