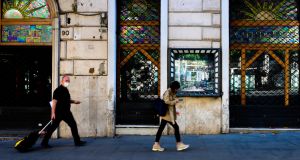 Demand for Italian debt, which comes with an ECB backstop, is high. Photograph: AFP via Getty

A bond sale that amounted to a vote on Rome’s handling of the economic crisis has been a success, raising the most on record.

The four-day auction of inflation-linked bonds aimed primarily at the retail market ended on Thursday, with the nation allocating €22.3 billion worth of securities, according to a source.

The nation received about €14 billion in orders from retail investors, and more than €19 billion from institutional investors, of which it accepted a little over 40 per cent. The five-year notes, intended for “Covid-19 emergency”, will have a final coupon of 1.4 per cent.

It’s the second time as many months that orders for an Italian bond sale were sizeable. With the European Central Bank backstopping the euro zone’s securities, demand for the nation’s debt is high, even after Italy boosted supply to help fund its economic relief programmes.