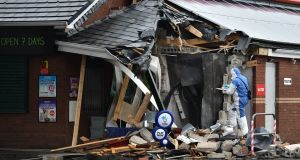 The PSNI has thanked “vigilant members of the public” for their help following the latest ATM theft in the North.

On Tuesday night detectives were questioning two men, aged 31 and 26, that they had arrested following the robbery at Nutts Corner near Crumlin in Co Antrim at around 3.30am on Tuesday. The men were also being questioned about a number of other offences.

Det Supt Rachel Shieldssaid the arrests were made after police received reports from a “number of vigilant members of the public” that a digger was being used to remove an ATM from the service station on the Tully Road. The ATM machine was also recovered.

Det Supt Shields said there were a “number of gangs carrying out these attacks on ATMs and the threat of more thefts is very real”.

“Every single one of these attacks impacts the community significantly – denying access to money and on many occasions causing inconvenience as the shop or filling station is forced to close for repair.”

Since the start of the year 15 cash machines were stolen in 12 incidents in Northern Ireland. There have been ATM thefts in Moira, Co Down; Omagh and Dungannon in Co Tyrone; Irvinestown in Co Fermanagh; Antrim town, Bushmills, Crumlin, Newtownabbey, Ahoghill and Ballymena, Co Antrim; Dungiven, Co Derry, and now Nutts Corner. There were also failed attempts in Craigavon, Co Armagh, and in Ballymena in Co Antrim.

Towns in the Republic close to the Border such as Ballybay and Castleblayney, Co Monaghan; Kingscourt, Co Cavan; and Kells, Co Meath, have also seen ATM thefts.

“We will continue to do all we can to catch those responsible,” said Det Supt Shields.

The detective added that the PSNI would have local police patrolling areas which could be vulnerable to an attack. “Detectives remain dedicated to investigating the thefts that have taken place. I assure you this remains a key priority for police.”

The owner of the service station, Gordon Stewart, said he was determined to reopen his business as soon as possible. He said this was the fourth attempt to steal a cash machine at his premises in the past 10 years.

“An hour after these guys have cleared up, I hope to have the place open again,” he said.