Daniel McAnaspie: the seven-year saga to catch his killers

Richard Dekker and Trevor Noone had a long history of violence, drugs offences and theft 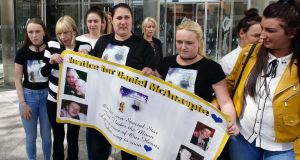 Family and friends of Daniel McAnaspie outside court on Monday after Trevor Noone was jailed for 13 years for the manslaughter of McAnaspie in February 2010. Photograph: Courtpix

The Garda investigation into Daniel McAnaspie’s brutal murder put two men behind bars. In the background to this seven-year saga is a history of violence, witness intimidation, false accusations against an innocent man, and the role played by a third man who removed Daniel’s body from the murder scene and dumped it in a farmer’s drain.

Although Richard Dekker is not a major gangland figure and certainly no criminal mastermind, in the small Blanchardstown cul-de-sac where he lived, his reputation instils a similar level of fear.

Over the years he has stabbed and tasered several people. His cruelty is renowned and gardaí were aware of it but, although he had many convictions, they weren’t always able to bring him to justice. In December 2009, less than three months before Daniel’s murder, Dekker stabbed a young man in the face. His victim, in fear of his attacker, refused to make a formal complaint to gardaí. Among Dekker’s multiple convictions is one particularly violent burglary during which he tasered a woman seven times.

He was a habitual thief and his violent outbursts were so common that most who knew him steered clear whenever they could.

After Daniel’s death, Dekker used his reputation to divert attention and intimidate witnesses

Knife fights were so common for Dekker that Trevor Noone bought him a stab vest to protect him from anyone who might fight back. Noone knew better than most about Dekker’s propensity for violence, having been a victim of Dekker. In interviews with gardaí, Noone revealed Dekker had regularly beat and threatened him throughout his childhood. On one occasion, when Noone was aged 10, Dekker locked him in a locker inside a shed for 10 hours before torturing him by dripping hot candle wax on his legs. Noone claimed that the bullying only stopped when Noone entered his late teens and was able to fight back. Although they were seen as friends, Noone claimed he never liked Dekker and only hung out with him because he was afraid to tell him to go away.

After Daniel’s death, Dekker used his reputation to divert attention and intimidate witnesses. Gardaí believe that a number of people saw Noone and Dekker as they lured Daniel into Tolka Valley to his death, but did not come forward out of fear of reprisals.

Despite Dekker’s ploys, a number of witnesses were brave enough to speak up and name Dekker and Noone as the last people seen with Daniel.

The removal and dumping of Daniel’s body was, for his family, one of the most harrowing aspects of this senseless and brutal killing. It is this aspect that brought a third man, Christopher Gaffney, into the Garda investigation. Gaffney, a known heroin dealer, was later brutally murdered, his body cut up and dumped in a drain in Co Meath. Gaffney was Dekker’s half-brother and the man he immediately went to for help as Daniel’s body lay hidden among the bushes in Tolka Valley. According to Trevor Noone it was Gaffney who decided the body would have to be moved and, as he owned a car, Gaffney was the man to do it. Noone also claimed that Gaffney gave them advice, “helping us to get our story together about that night and telling us to keep it simple and not to go too much into it to trip ourselves up.”

Gaffney gave Noone and Dekker a suitcase, which they washed out with bleach to remove any traces of Gaffney’s DNA. He then drove to Tolka Valley with Noone and Dekker in the early hours of February 28th. Daniel had been dead for two days. Noone and Dekker retrieved the body, stuffed it in the suitcase and texted Gaffney when they were back at the road. They put the bag in the boot and Gaffney drove to Co Meath where he dumped Daniel’s body.

It would take another three months for his body to be discovered by a farmer.

Gaffney was murdered in 2013 and his body dumped in a field in Co Meath. The similarity with how Daniel was treated suggests a link, and gardaí have considered that his killers could be Finglas-based gangsters who wanted revenge for Daniel’s death.

While in custody Trevor Noone has been attacked and threatened for his part in Daniel’s death and when he was on bail he made sure to cover his face completely to ensure photographers would not get fresh pictures of him entering the court. Prison officers do not allow Noone and Dekker in the same room for fear that they will come to blows.

Dekker, Noone and Gaffney all have multiple convictions for violence, drugs offences and theft. None of them has ever worked and they have all been in receipt of social welfare for their adult lives.

In compiling their case against Dekker, gardaí noted how little remorse he showed for what he did to Daniel McAnaspie. During garda interviews he spent hours refusing to answer questions. Only when shown the statement of Trevor Noone, in which Noone had named Dekker as the one who stabbed Daniel to death, did Dekker give an account of what happened. In that account, he blamed Noone and claimed he begged Noone to stop stabbing the teenager but that he was afraid to intervene. In follow-up interviews he returned to his earlier position of refusing to comment.

He maintains that he bears no responsibility for Daniel’s death and ruled out a plea of guilty to manslaughter during his trial, saying that he would not admit to something he didn’t do.

What Noone and Dekker did on that cold February night in 2010 was extinguish the life of a young man who had known much tragedy during his short life. Daniel’s father, Leo Carroll, died of a drug-related death in 1996 when Daniel was just four years old. His mother Martina died in front of him when he was 14. Following his mother’s death he was put in State care and was living in and using an out-of-hours HSE service before being housed in Donabate shortly before he died. He had come to the attention of gardaí for alleged thefts and for stealing a car. Gardaí had a number of missing person reports relating to him before February 26th, 2010, when he went missing for the last time.