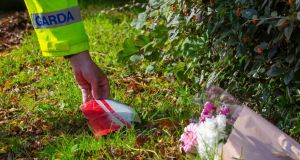 A garda handles a piece of debris near the scene of the aircraft crash in Duncormick, Co Wexford. Photograph: Patrick Browne

A former manager of Waterford Airport was one of the men who died in Sunday evening’s aircraft accident in Co Wexford.

Peter Tawse (61) from New Ross, and his flying partner John Finnan (58), from Co Kildare, died when their light aircraft came down near Duncormick in Co Wexford 15 minutes after they took flight.

The Air Accident Investigation Unit and the Irish Aviation Authority are examining the circumstances of the fatalities.

There was a palpable air of shock on Monday in the quiet community of Duncormick, where the crash scene remained cordoned off.

At about 5.45pm on Sunday the aircraft carrying the two men got into difficulty and collided with the ground near the townland of Gibletstown.

The men were killed instantly when their Rollason Condor hit the ground having taken off from the Irish Light Aviation Society (ILAS) airfield at Taghmon a short time previously. Locals reported hearing the loud bang from the incident and debris was left scattered over a distance of about a mile. Emergency services quickly arrived.

Mr Tawse grew up in England and came to Ireland in the 1980s. He moved to Co Wexford and worked in Wexford Flying Club as an instructor before continuing the role in Waterford.

In 1982, Mr Tawse began teaching people to how to fly aircraft, amassing more than 7,000 hours flying experience as of 2016.

He became widely known through his role as manager of Waterford Regional Airport from 1987 to 2003. The airport had opened in 1981 and he helped develop its services, including parcel routes.

Subsequent to Waterford airport, Mr Tawse was chief flying instructor at a flying club in Taghmon.

He was also a classroom instructor and worked across the region at second and third levels.

Mr Tawse is survived by his wife, Kay Furlong, his mother and two sisters.

Friends recalled him as a man who adored aviation. “Flying was his thing. He had no interest in anything else,” said Willie Cullinane, who befriended the Englishman shortly after he moved to Ireland in the 1980s. “He was a very well liked man, there were very few people who didn’t get on with him.”

Mr Cullinane said they had flown together “all over Europe”. “Peter was an exceptional pilot,” he said.

He said Mr Tawse was a quiet man who was careful in relation to everything to do with aviation.

“Everyone in Irish aviation who will be experiencing a sense of loss” the Waterford Aero Club said.

In a Facebook post, the club said Mr Tawse was a regular contributor to aviation publications with “vast” knowledge and experience.

On Waterford radio station WLR FM, presenter Damien Tiernan remembered Mr Tawse as a knowledgeable and polite man whom he had encountered when covering a tragic aircraft incident in 1999 for RTÉ, in which four Air Corps crewmen died when their craft crashed into sand dunes at Tramore.

Local businessman Pádraig Ó Gríofa remembered Mr Tawse as “a lovely man”. “He had jet A-1 [fuel] in his veins, not blood. He loved aviation,” he said.

He was also fondly remembered by colleagues at Institute of Technology Carlow, where he taught part-time and helped develop an evening course in aircraft systems.

“He was brilliant flight instructor and will be sadly missed by all who knew him,” said Gerard Gibbs, programme director in aerospace engineering and aircraft systems at the institute.

Tributes were also paid by New Ross councillor Michael Sheehan, who said old schoolfriends of his could remember being students of Mr Tawse in the town in the early 1990s.

“As cathaoirleach of Wexford County Council, I would like to express our deep shock and sadness to the families and community of the casualties of the accident. It is with a deep sense of loss that we learned about the fatal crash.”

“Although Peter’s flying partner John Finnan was unknown to us, as fellow aviators we offer again condolences to his family and friends,” the club added.