Transgender woman recounts facing up to sexuality while in Orange Order 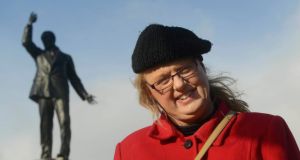 A transgender woman, who was in the Orange Order when she lived as a man, has described how she faced up to her sexuality after coming to live in Northern Ireland and attending a Gay Pride parade.

The woman, identified as Adrianne in a BBC television interview, recounted how 11 years ago she came to Belfast from England, joined the Orange Order and demonstrated against the 2005 Gay Pride parade.

Adrianne told the BBC’s Victoria Derbyshire programme that it was a defining moment in her life as she realised she must “face up” to what she was.

She has since resigned from the Orange Order but describes herself as religiously and politically conservative and said she would like to rejoin the loyal institution at some stage.

Adrianne, who is originally from Merseyside, told the programme that at the protest she caught the eye of a young gay man and in that moment decided her life must change.

“I just thought, ‘what am I doing here? Why am I protesting against them? They’re just human beings like me,’” she said. “I knew at that moment that I had to start living as a woman.”

She said she moved to Northern Ireland because she hoped it would help her overcome the continuing distress she felt over being born male. In her mid-30s she joined the Orange Order and also the late Rev Ian Paisley’s Free Presbyterian Church.

She hoped by immersing herself in religion she could suppress her gender dysphoria. “My theory was like the plant analogy. If you don’t water it, it will die. So if you don’t give the transgenderism a thought, then you can’t dwell on it and it’ll go away.”

This did not work, however, and four years ago she began making the transgender transition, she told the BBC.

Adrianne resigned from the Orange Order and also has left the Free Presbyterian Church to join another Protestant church. She said she found it challenging to be a transgender unionist and a Christian.

“I feel marginalised. I don’t feel like I belong in the LGBT community, because of my history and my political beliefs,” she said. “Conversely, I no longer feel part of the evangelical, conservative, Protestant community. The nature of what I’m doing excludes me from that social sphere.”

She said she would like to rejoin the Orange Order, in the women’s lodges. “I think it would be possible, but maybe that’s something for another generation,” she added.

The Order said that “any application for membership of the Orange institution is treated on its own individual merits”.

Adrianne has since married her partner, who is also transgender. The couple said they have experienced transphobic abuse in Belfast, though the number of incidents has decreased as awareness of transgender issues has grown.

“They say things like ‘you’re a pervert . . . and you want raping’. Some of it can be very hurtful and intimidating,” she said.

As part of the BBC film, Adrianne met Mary Ellen Campbell, the Sinn Fein deputy Lord Mayor of Belfast, who is the first openly gay person to hold such a senior council position in the city. She thanked Adrianne for telling her story, saying, “It is people like yourself, who go through those hard battles, that makes the journey easier for others.”

Ms Campbell said Belfast was now a “welcoming city” for gay people. “If you’re LGBT, Belfast is a great place to come and visit. We’re a progressive city and we’re open for business,” she said.