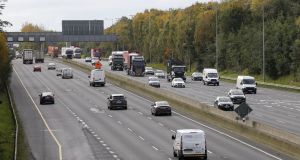 Traffic along main commuter routes and in Irish cities was “significantly busier” on Tuesday morning as the State’s second lockdown ended and non-essential retail outlets, churches, gyms, hairdressers and other businesses reopened, AA Roadwatch has said.

Traffic in Dublin and Cork cities was “noticeably busier” with “substantial levels of traffic” on the roads by 9.30am, said AA spokesman Barry Aldworth.

Roads around Dundrum shopping centre in Dublin and Douglas in Cork were busy from early on Tuesday indicating that people were eager to get started with their in-person Christmas shopping straight away, he added.

While Tuesday was busy, Mr Aldworth said he expected traffic volumes would pick up “gradually” over the coming days as the advice remains that people stay within their own county. However, from December 18th, roads will get busy, he said.

“Once it’s the 18th I would expect a lot of people will be travelling home to visit relatives. In previous years we would see the 23rd as the big day for travel home but this year people don’t need to think about taking annual leave to travel as they can work from home.

“I wouldn’t expect a mad rush on any one day. I think it will be more spread out as people have that full week to travel.”

Traffic volumes dropped to about 65 per cent the level usually seen in October and November while the latest Level 5 restrictions were in place. However, levels remained significantly higher than what was seen in March when many routes recorded levels as low as 35 per cent what would typically be seen on a weekday.

The decision to keep schools open and to allow construction sites to continue operating during the second lockdown no doubt contributed to the larger volume of cars on Irish roads, AA Roadwatch has said.

While traffic volumes have dropped at different points this year, deaths on Irish roads continue to be a problem with 135 people losing their lives in collisions so far this year, up 10 on the same period last year.

AA Roadwatch is urging drivers to take extra precautions when driving during wintry conditions and in the lead-up to Christmas.

“Routes will be busier because of people travelling to see family and people may be driving on roads they’re not familiar with,” said Mr Aldworth. “Like every year at Christmas, always exercise caution when driving and allow space between yourself and other road users.” Drivers should also be particularly aware of the increase in the number of people cycling and walking on the roads during the pandemic, he added.

Meanwhile, general secretary of the National Bus and Rain Union (NBRU) Dermot O’Leary called on Minister for Transport Eamon Ryan to meet with the union following the decision to increase capacity on board Dublin Bus from 25 per cent to 50 per cent of normal levels from Tuesday.

Mr O’Leary told RTÉ's Today with Claire Byrne show that he feared the situation could end up “in the appalling vista” that had occurred in London when transport workers lost their lives because of Covid-19.

Mr O’Leary said he was particularly concerned that the 50 per cent capacity would include standing room as well as seats, warning that some people might not be prepared to leave seats empty and stand instead.

Anecdotal evidence from drivers shows people are closing windows left open for circulation because of the cold weather, he said. Staggered opening times for retail outlets would also help ease congestion on public transport, he added.

Mr O’Leary said he hoped the issue would be taken seriously by the minister as it was not acceptable to have his members “dictated to”.