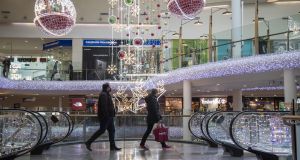 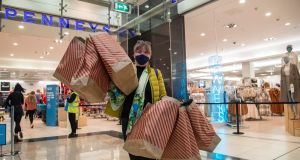 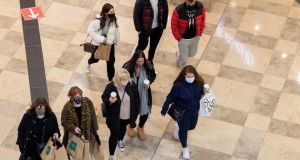 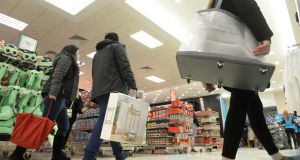 The State has started to reopen following the six-week lockdown amid a “fresh buzz” around town and city centres with “manageable” queues forming outside some retailers as shoppers started their Christmas spending in earnest.

Dublin city centre was busy on Tuesday with dozens of people lining up outside Brown Thomas ahead of its 10am opening.

However, according to Retail Excellence, there were no indications from its members that crowds were an issue, and it there was broad compliance with regulations governing face masks and social distancing.

The head of the retail umbrella group, Duncan Graham, said there was “a buzz around the place and a real feel-good factor seems to be back”.

He said that footfall was as he had anticipated and that town and city centres were busy.

“There was a decent crowd on Grafton Street this morning which was pretty much what we expected, and so far it has all been very manageable.”

He said that it was clear “people are happy to be out and about again, and we have seen a couple of new retail units opening including Canada Goose on Grafton Street.”

He said consumers were well accustomed to anti-Covid-19 measures and the wisdom of avoiding crowds. “I think people are used to the multi-channel shopping experience and know that if they want to avoid physical shops they can either click and collect or shop online.”

Mr Graham added that extended opening hours across many retailers in the run-up to Christmas would make consumers feel more secure as they shopped at a time of their choosing.

He also pointed out although broad swathes of the retail sector were reopening, the country had only moved to Level 3, which meant travel between counties for non-essential reasons was not permitted.

“I think that is going to give regional shopping a real bounce in the next couple of weeks and towns around the country will be busy,” Mr Graham said.

He suggested that might come at a cost for the traditional retailing magnets of Dublin city centre and large shopping centres on the outskirts of the capital that would normally be hugely popular for people in neighbouring counties in the run-up to Christmas.

“I think on December 18th when the levels change again and travel between counties is allowed we will see places like Grafton Street and the Dundrum Town Centre get busier,” he said.

“Retailers will be delighted to be open,” retail expert and TU Dublin academic Damien O’Reilly said ahead of the move to Level 3.

“I think they will do whatever is needed to manage things because they won’t want to blemish their copybooks and have scenes of overcrowding and chaos seen around some pubs.”

Anticipating that footfall in the weeks ahead would be about 30 per cent down on a normal Christmas, Mr O’Reilly said the people that were shopping would be in the mood to spend money as pent-up demand was unleashed.

He suggested that although retailers would manage crowds in shops a bigger challenge would be to manage streets. “It might be easy to control the flow of people on to Grafton Street but somewhere like Henry Street will be harder, and if it gets very busy the numbers on the streets will have to be restricted.”

Dublin City Council is placing “queueing icons on the ground in the main pedestrianised streets in the city centre and O’Connell Street”, and it called on retailers to take care “to ensure that appropriate social distancing is being observed in the on-street queue”.

A spokesman for Galway City Council said it had been working “closely with Galway Chamber, local businesses and other business groups in the city to ensure that Galway is a safe destination for shoppers this Christmas”, and he said queueing guidelines had been circulated.

In Cork, the council has been engaging with businesses and local agencies to ensure the reopening is safe and welcoming and follows public health advice.

“It is difficult to predict how shoppers and other consumers will react to the lifting of many of the restrictions which have affected them over the past six weeks,” a spokeswoman for the council said, adding that guidelines on social distancing and orderly queueing had been issued.

Many retailers will be operating extended hours, and some are planning to open overnight on certain days.