Protesting farmers in their tractors and other vehicles brought traffic to a standstill in parts of Dublin city centre. Organisers say they are planning to continue their demonstration overnight. Video: Bryan O'Brien 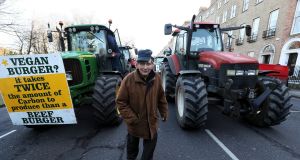 Vincent Black, a farmer from Cavan, among tractors parked on Merrion Square in Dublin city centre as a protest by farmers over the prices they get for their produce continues. Photograph: Brian Lawless/PA

Parts of Dublin city centre remain closed to traffic overnight on Wednesday due to a tractor blockade by farmers.

Around 100 tractors and trailers are currently located on St Stephen’s Green and Merrion Square, with farmers planning to stay in their vehicles until Thursday morning. Organisers say there will be more tractors coming to the capital on Wednesday night.

Traffic was brought to a standstill on Wednesday afternoon as tractors lined Westland Row and Lombard Street East. The vehicles were eventually moved around to Merrion Square.

John Dallon, from Castledermott, Co Kildare said he and other farmers will continue to hold tractor blockades until the price of beef rises.

“The price of beef at the minute is €3.60 a kilo. If you look at the price of beef in England, we’re about 50 cent behind and across mainland Europe we’re 22 cent behind the average. Why should we continue to be treated the way we’re being treated,” he said.

“We feel that we have to come to Dublin as individual farmers to drive the message home. We don’t want to be here, we have a lot of farm work to do, cattle to feed at home... We’re entitled to a livelihood and we’re not getting it. We’re not even getting the cost of our production, how are we expected to live?”

Derek Forde, a former beef farmer from Castleblayney, Co Monaghan said he was there to support farmers.

“I had to quit keeping cattle because it wasn’t viable... It was tough to walk away from it,” he said.

“Being a beef farmer at the minute, you’re not even breaking even, you’re running at a loss especially with cattle.”

Former Sinn Fein TD and leader of Aontu Peadar Toibin told the farmers gathered that he commended their demonstration.

“This Government have M50 vision, they cannot see beyond the M50. The only way that you can crowbar the issues of rural Ireland back into the political debate in this country is to do what you’re doing here,” he said.

Mr Toibin said there is a “charade happening” in the Department of Agriculture that is “no good to anybody”.

Independent candidate for Wexford Verona Murphy also attended the demonstration, and was confronted by some protestors.

“There is pure and utter decimation of rural Ireland socially and economically. Economically you can see the farmers are here because they are not being supported,” she said.

The former Fine Gael candidate said she supported farmers protesting in the capital as “I know their back is to the wall”.