Halligan criticises Independent Alliance colleagues as he bows out of politics 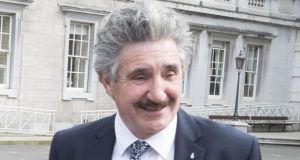 John Halligan announced on Wednesday he will not be standing in the General Election on February 8th. File photograph: Dave Meehan

The outgoing Minister of State for Skills John Halligan has criticised his Independent Alliance colleagues Finian McGrath and Kevin ‘Boxer’ Moran for comments he described as “disloyal” and “disappointing.”

Mr McGrath, the outgoing Minister of State for Disability Issues, suggested in an interview this week that he believed Fianna Fáil would be in a position to lead the next Government, while Kevin Boxer Moran said he would be running in the election outside of the Independent Alliance banner.

Mr Halligan, who represents Waterford, said he was “disappointed” by Mr McGrath’s comments.

“We are still ministers, so we should stay loyal. My view is I think Fine Gael will win.”

He added: “On many occasions I spoke to him late at night, and he always took my calls...I don’t know why Finian made those comments. I wouldn’t have said something like that.

“I am still a member of Government for the time being so in relation to Fianna Fáil, why would I give credence to them?”

Mr Halligan said he believed the main issues in the election would be stability and the economy, housing and health.

“One of the points I would make is that the Fianna Fáil party left the economy in tatters. Housing is a serious issue but a substantial number of houses have been built. I think it is going to be down to independents and small parties again.”

On Mr Moran’s move to run outside the Independent Alliance umbrella, Mr Halligan said he was “very disappointed in Boxer.”

“I had spoken to Boxer and he gave no indication he was disillusioned at all. I don’t know what he was at. I don’t think it was fair on the Alliance. He had no criticisms of us at meetings. He probably did it for his own reasons, maybe to get elected,” he said.

Mr Halligan said he would be canvassing for outgoing Minister for Transport Shane Ross.

Mr Halligan announced on Wednesday that he will not be standing in the General Election, which will take place on February 8th.

“It wasn’t a difficult decision to take. I am 65 this weekend. I just got burned out and that is about the size of it. I felt I didn’t have the appetite or fire in my belly any more.

“I am sure I would have won the seat but it would have been unfair to the people of the constituency.”

He said he has already had a job offer but want to “relax” for a few weeks and spent some time in the laboratory which he has constructed in his home studying microbiology.