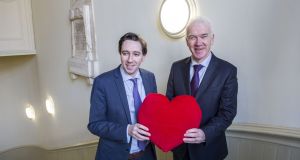 A total of 231 transplants were completed in the State in 2018 from 80 donors, many of whom donated multiple organs, according to the HSE’s Organ Donation Transplant Ireland (ODTI).

“Following record numbers of transplants in 2017, we have seen consistently robust rate of organ donation and transplant in 2018, this reflects positively on the generosity of Irish society and the professionalism of the intensive care, theatre, medical and nursing staff,” Professor Jim Egan, director of ODTI, said.

In 2018, Vera Dwyer from Sligo, the world’s longest surviving lung transplant patient, celebrated the 30th anniversary of her transplant in November at a ceremony at Mater hospital.

Earlier this year Minister for Health Simon Harris obtained approval to move ahead with legislation to provide a “soft” opt-out system of consent for organ donation.

Under this system when a person dies, consent would be deemed to have been granted unless the person, while alive, registered their wish not to become an organ donor. The “soft” element of it is that the next of kin will always be consulted before any organ is removed.

“We are in the business of saving lives, we have seen a reduction in road accidents and this influenced the rates of organ donation,” he said.

He said donations come about because of very professional intensive care staff. “We are blessed with such staff.”

He said that the documentary on Orla Tisnley documentary had illustrated very clearly how organ donation saves lives.In September a documentary on the the Cystic Fibrosiss campaigner was aired. The documentary was filmed over 14 months in New York and charted Ms Tinsley’s struggle while her cystic fibrosis worsened as she awaited a life-saving double lung transplant, which she finally secured following a number of false alarms.