Mass extinction of species is happening in Ireland, NGO says 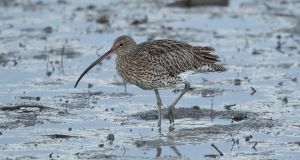 A number of species are ‘critically endangered’ and face a real risk of disappearing entirely without urgent action, including the curlew. Photograph: Mark L Stanley via Getty Images

Mass extinction of species is happening on Ireland’s doorstep. “It is not something which is happening somewhere else,” according to the Irish Wildlife Trust.

A third of all species groups examined in Ireland, including plants, birds, butterflies, freshwater fish, dragonflies and sharks are either threatened with extinction or “near threatened”, it said.

Although the climate crisis and its causes were relatively well known, the related “extinction crisis” was receiving less attention, the trust stated in a submission to the Government’s Climate Action Committee.

In addition to global warming, loss of species is being driven by habitat loss, pollution and unsustainable use of resources, it warned.

“Ninety per cent of our highest-value habitats protected under the EU’s Habitats Directive are in ‘poor’ or ‘inadequate’ status,” it said.

Only 0.6 per cent of once-unique raised bog habitats in the midlands remain intact. In addition, Ireland has the second-lowest forest cover in Europe; only about 1 per cent of our land area consists of native woodland.

Chronic overfishing “has decimated the populations of once-abundant fish species such as cod, whiting, sole and herring”, and a third of native bee species face extinction, it said.

Some 50 per cent of Irish rivers and lakes “are polluted, while obstructions such as dams contribute to once common species like Atlantic salmon appearing on the endangered species list.

A number of species are “critically endangered”, and face a real risk of disappearing entirely without urgent action, including the curlew, the angel shark, the freshwater pearl mussel and the European eel.

“Restoring nature is likely to be the easiest, cheapest and most effective form of climate action available,” the trust said.

It called for an independent nature conservation agency to implement existing conservation commitments and underlined the need to “re-wet and re-wild” midlands bogs. Coillte, it said, must manage existing conifer plantations but restore them to native woodlands.

The revised Common Agricultural Policy should adequately reward farmers for farming in a nature-friendly way so that Irish agriculture can be “carbon negative”, it added.

“Weakened ecosystems cope poorly with climate change – as was experienced through 2018 as farming communities struggled with weather extremes,” it said. “Small-scale coastal fishing communities have all but disappeared. Conversely, restoring natural systems brings great opportunity in bringing benefits back to local people and resilience to those who depend upon them.”

The trust hoped the Climate Action Committee could see the opportunity that restoring nature would provide in determining on how best Ireland should respond to climate change.

“We firmly believe that this is a decisive moment in our relationship with the natural world and that we are likely to be the last generation to have the power to take meaningful measures to save life on Earth. This can be done to the great benefit of Irish communities,” Irish Wildlife Trust campaign officer Pádraic Fogarty stated in the submission.