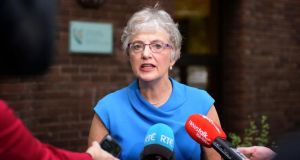 Minister for Children Katherine Zappone is committed to release of birth information to the greatest extent possible within constitutional constraints, a spokesperson said. Photograph: Eric Luke

Minister for Children Katherine Zappone is set to redouble efforts in the New Year to help adopted children trace their parents.

Ms Zappone is in consultation with the Attorney General in order to bring the stalled Adoption Information and Tracing Bill before the Seanad after the Christmas recess.

The law would give adopted children access to information on their birth as well as providing access to birth certificate information for adopted people who found out that they had been wrongly registered as the biological children of their adoptive parents.

The Bill has made some progress through the Oireachtas but then stalled amid issues in relation to privacy. The Bill contained a provision that adopted children must sign an undertaking not to contact their birth parents if they are given their birth certificate and if the parents had indicated that this was their wish.

The Department of Children has said the proposed law will operate on the basis of a presumption in favour of disclosing information where it is legally possible to do so.

“It is the Minister’s intention to progress the Adoption Information and Tracing Bill 2016 to Committee Stage in Seanad Éireann as soon as possible in the New Year,” a spokesman said.

“This is an important piece of legislation as it provides adopted people and other relevant people with statutory rights to information and to a tracing service. It will also protect relevant records by bringing them into the custody of the Adoption Authority of Ireland and it will create offences for the concealment, destruction, mutilation or falsification of such records.

“The Minister is committed to release of birth information to the greatest extent possible within constitutional constraints, and continues to explore mechanisms to achieve this aim, in consultation with the Attorney General’s office.”

The spokesman said that the Bill must operate in the “current constitutional framework” and that it must “seek to balance the rights to identity and to privacy, which may sometimes be in conflict”.

“However, the Bill operates on the basis of a presumption in favour of disclosing information in so far as is legally and constitutionally possible.

“The Minister looks forward to working with her colleagues in both Houses to ensure that this legislation is enacted as soon as possible,” the spokesman said.

The Bill also impacts on people who are the subject of illegal registrations, as well as adopted people.

It emerged over the summer that 126 men and women had their births deliberately falsely registered between 1946 and 1969. The incorrect registrations were uncovered in an analysis of the records of the St Patrick’s Guild adoption society.