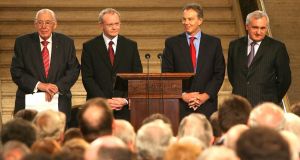 Tony Blair told Martin McGuinness that the British were partially responsible for the conditions that led to the Troubles, a new documentary states.

During talks which led to the Belfast Agreement, Mr McGuinness, who died in 2017, recalled that Mr Blair, then British prime minister, told him that he had read several books on Irish history.

“These are his words not mine, ‘the British were as responsible for what happened in the North of Ireland as anybody else’,” Mr McGuinness states in an undated interview.

“For me that was a huge admission. It had the effect of convincing me that we were dealing with somebody who was actually serious about finding a solution.

“Flowing from that we had the Good Friday agreement and a transformed political landscape.”

The interview is contained in a documentary on Mr McGuinness to be broadcast on TG4 on Wednesday. Mr McGuinness was Sinn Féin’s chief negotiator during the peace talks having previously been part of an IRA delegation who had talks with the British government in 1972. He later became Deputy First Minister in the Northern Ireland Assembly. The documentary is entitled Martin McGuinness Trodaí, Idirbheartaí, Polaiteoir (Martin McGuinness – I fought, I made Peace, I made Politics). These words were spoken by former US president Bill Clinton at his funeral Mass.

Mr Blair was not immediately available for comment on the interview with Mr McGuinness which was included in the programme.

Mr Blair told the documentary that they were in a country house in Britain negotiating with Sinn Féin when the pair were strolling in the grounds.

They saw Gerry Adams with his arms around a tree. “What’s he doing?” Mr Blair said.

Mr McGuinness responded: “He’s tree-hugging. Look what I have to put up with.”

On a more serious note, Mr Blair said that the peace process was always difficult, but made easier by Mr McGuinness’s determination to make it work.

“All of it took his determination to make the future different to make it work. It showed people in an unconventional way in a unique set of circumstances of how politics can make a difference,” he told the documentary.

Mr Clinton said the former deputy first minister was the type of man who could “talk an owl out of a tree”.

He said Mr McGuinness had got on much better with Ian Paisley “than I ever had” and realised that Mr Paisley had reached the limits of his opposition to powersharing.

“He had become quite a professional. He got a lot of good publicity for getting on with Ian Paisley,” Mr Clinton recalled.

“In the end Martin understood that Paisley had reached the maximum political benefit he could get from out of being the hard guy. He bet that Paisley would want to deliver.”

Mr Paisley’s son Ian Paisley Jnr, DUP MP for North Antrim, said he had been often asked how he and his father could deal with a “former terrorist”. Mr Paisley Jnr stated that when he was growing up he saw the IRA as terrorists who were involved in killing members of his community. “They were people to be absolutely detested”.

However, he said that they dealt with him because he was a “former” terrorist who had chosen peace.

Former Ulster Unionist leader David Trimble, who won the Nobel Peace Prize for his role in the peace process, revealed that he wrote a letter to Mr McGuinness before his death thanking him for his role in bringing peace to Northern Ireland. “I’m glad to know that it got through to him,” he said.

Julie Hambleton, whose sister Maxine was killed in the Birmingham pub bombings of 1974, said she would never forgive Mr McGuinness for not revealing the names of those who had carried out the bombings nor where the IRA disappeared are buried.

“He could have put so many people out of their long-term misery. That was unforgiveable,” she said.