Project costing €1.2 billion to go to An Bord Pleanála by 2023 for planning approval 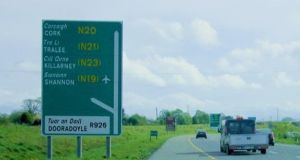 A sign for the N20 is seen on the approach road to Limerick city. The new Cork to Limerick motorway will involve an upgrade of the existing N20

The new €1 billion-plus Cork to Limerick motorway will involve an upgrade of the existing N20, via Mallow and Charleville, Transport Infrastructure Ireland has said.

The option was selected over a proposal to take a spur off the existing M8 at Mitchelstown and building a motorway through east Limerick.

TII officials, along with officials from Limerick City and County Council, which is the lead authority for the project, briefed elected representatives from the region at a meeting in Charleville in north Cork on Wednesday.

Public representatives from Mallow, Buttevant and Charleville as well as towns in Duhallow, such as Kanturk and Newmarket, had expressed concerns that utilising the M8 to Mitchelstown rather than upgrading the N20 would not address traffic congestion currently curtailing their development.

The M20 Cork to Limerick Motorway Scheme had previously progressed through planning and design phases and the scheme was submitted to An Bord Pleanála in 2010 for statutory planning approval but the project was withdrawn in 2011, due to the economic downturn.

At the time, it was estimated the 80km stretch of motorway from Blarney near Cork city to Attyflynn near Limerick would cut travel times between the two junctions from 61 minutes to 45 minutes and would cost in the region of €850 million of which €150 million would be spent on land acquisition.

Informed sources, however, suggest the likely cost at about €1.2 billion given increases in construction costs. It is hoped the project will go to An Bord Pleanála by 2023 for planning approval.

“It’s still estimated that it will take four years to build the project so we would be hopeful that it would be open and operational sometime in 2027,” said the source.

According to the TII and Limerick City and County Council, the decision to go for the N20 corridor option comes following a year of analysis which included consideration of all potential options including bus and rail public transport alternatives.

The N20 corridor option provided the highest journey time savings between Cork and Limerick as well as having the potential to save the greatest number of road-based collisions, accidents and fatalities across the network.

It would also provide an opportunity for express inter-city bus services to use the new route and would therefore lead to improved public transport service times and reliability as well as providing good opportunities for connections to the existing Cork- Limerick rail link.

According to TII and Limerick City and County Council, the N20 corridor option would also offer the prospect of the greatest transfer from the existing road network to the new route and would provide the highest level of traffic relief to towns such as Mallow, Buttevant and Charleville.

“It would also provide a step change in connectivity between Cork and Limerick and improve connectivity for regional towns along the corridor as well as providing the opportunity to grow the Atlantic Economic Corridor by improving connections to west Cork and Kerry,” said the TII.

Some 800 letters have been sent out to land and property owners around the N20 corridor as the first stage of a public consultation process which will take place in the latter part of 2020. The public may submit their views, comments and queries to the project team over the coming months and further details of the project objectives, the appraisal process, the evaluation of scenarios to date and the next steps are available for examination on corklimerick.ie