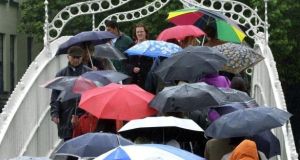 The warning was on Tuesday issued for all of Connacht, as well as Longford, Donegal, Clare and Kerry. Photograph: Haydn West/PA

Met Éireann has issued a status yellow rainfall warning leading to localised flooding for the west of the country, with heavy rain expected throughout Wednesday and into Thursday.

The warning was on Tuesday issued for all of Connacht, as well as Longford, Donegal, Clare and Kerry. Heavy rainfall is forecast from 4am on Wednesday morning through to the same time early on Thursday morning.

Some 25 to 40mm of rain is expected, with Met Éireann warning that “localised flooding is likely as ground is saturated at the moment and river levels are elevated following recent heavy rainfall.”

There are also strong winds forecast for the west of the country, with gusts of up to 50 km/h forecast for some counties.

The AA warned drivers that they should only drive through standing water if they are sure it is not too deep for their vehicle. Drivers are also being told to slow down on wet roads and leave extra space to break, as it takes longer to stop a vehicle in wet weather.

Rain is forecast across the country, with best dry spells in the east and southeast. Temperatures will be milder than in recent days, with highs of nine or 10 degrees in fresh to strong and gusty winds. A cold night is ahead though, with lows of 1 to 4 degrees and some frost and ice possible as clouds clear in the northwest later on.