There is much respect in Berlin for what Ireland has achieved, but getting our debt relief wishes past the Bundestag will be difficult 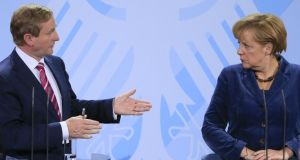 Closing the door on the EU/IMF programme ends three difficult years for Ireland, but also for the Irish in Germany. For years, Germany registered no more than friendly disinterest back home. Overnight the bailout made every trip back to Ireland a minefield thanks to the inevitable question: “So what do they think of us in Germany?”

Whether posed by family, friends or taxi drivers, the question was as loaded as the old journalism school chestnut: “Do you still beat your wife?”. The honest answer was “They don’t think of us, Ireland simply doesn’t register on most German radars”.

But that often caused dismay (“Don’t they know how much we’re sacrificing here?”) or even truculence (“the German banks shouldn’t have given us so much money”).

Trying to salvage the situation often made matters worse. “Well, when the Germans do think of Ireland,” the Irish emigrant could reply, “they seem to think they are working hard to get back on their feet.”

That risked raising further hackles about the Germans being patronising. On and on it went. And yet, in conversations in the last years from the Munich beer-halls to the Bundestag in Berlin, Ireland’s EU/IMF programme was rarely registered and the positive view of Ireland in Germany remained undimmed.

Watching Ireland from Germany on the other hand, it seemed at times that Germany and its leader – collectively known as “the Germans” – were Ireland’s new favourite obsession.

The last three years has changed utterly our relationship with Germany, but it was always up to Ireland to settle once and for all its domestic Boston or Berlin debate.

What is striking in hindsight is how civil everything remained in the past three years. In regular meetings Enda Kenny and Angela Merkel often disagreed, particularly on debt relief for Ireland. But the bilateral relationship always remained strong and Mr Kenny’s stock rose even higher after delivering on the fiscal treaty referendum. By last November’s meeting, Mr Kenny’s relationship with Chancellor Merkel was upgraded from the more formal “Sie” form of “you” to the “Du” form – usually reserved for close friends. As the Germans like to say, even friction creates warmth.

Over at the finance ministry in the Wilhelmstrasse, a forbidding place of pilgrimage for Irish officials in the past three years, senior German officials have nothing but respect for their opposite numbers in Ireland. In a tough negotiations, they say, the Irish gave as good as they got – and then some.

“Ireland took a difficult but, in the end, successful path and is a good example that Ireland is on the right track,” he said to The Irish Times. Lower interest rates and successful sovereign debt auctions were clear evidence, he said, that market confidence is returning and the country is more competitive than before. But Mr Schäuble’s praise came with a clear note of caution to post-troika Ireland in general, and the Government in particular.

“Now it’s important that Ireland continues its reform course to the end and secures for good its return to capital markets,” he said.

Senior German officials pinpoint two key factors in Ireland’s three-year turnaround. Firstly: Ireland started in a better place than many other crisis countries. Even with losses in pay competitiveness and the burden of nationalised banking debt, Ireland always had a functioning and open economy.

The second key factor, they say, was Dublin’s attitude early on to, quite literally, get with the programme. “Ireland took ownership of the programme at the start and didn’t view it as being imposed by outside forces,” said a senior adviser to Chancellor Angela Merkel. “They viewed the measures as something to be achieved in one’s own interest, based on one’s own convictions.”

Perhaps the key moment in German-Irish relations in the past three years was the moment of truth on what it meant to lose economic sovereignty. A somewhat abstract concept became painfully clear when details of Ireland’s upcoming budget were presented to the Bundestag budgetary committee and published by The Irish Times. There was much upset in Dublin but the fuss died down and members of the Bundestag’s budgetary committees, their hands full with Greece and other problems, say regular Troika reports from Ireland were never a source of concern requiring excessive scrutiny.

That doesn’t mean they aren’t tuned in to the continuing debate on what Dublin views as the unfinished business of its bank debt backed up by its “we took one for the team” argument.

Norbert Barthle, Christian Democratic Union (CDU) head of the Bundestag’s powerful budgetary committee, warns that opening the ESM bailout fund to retrospective bank recapitalisations would push to its limits a bailout fund he says was envisaged to assist struggling states, not banks.

“Changing the ESM rules would be very difficult to get through parliament and I would have great doubts about whether a majority is likely,” he said.

So is Ireland likely to get its debt relief wishes past the Bundestag? Mr Barthle shakes his head slowly. Officials close to Dr Merkel and Wolfgang Schäuble haven’t closed the door for good on further debt concessions but say they would take a dim view if Ireland contradicted the view of financial markets at the moment that the country is back on its feet. They recall concessions made to Ireland – reduced interest rates, extended loan maturities and a deal on the infamous promissory notes. That effectively amounted to illegal central bank monetary financing – a huge taboo in Germany – but Berlin looked the other way.

Huge burden
There is recognition in Berlin that Dublin took on a huge burden in nationalising banking debt in 2008. But this is viewed as a sovereign Irish decision, just like the preceding policies of attractive corporate tax rates and light-touch financial regulation.

“A lot of money was attracted to Ireland, the prosperity was financed largely from outside,” said Mr Barthle. “The consequences of that decision are deplored but the positive effects were accepted happily at the time.”

Rarely mentioned in the Irish debt relief debate is how the collapse of just two German banks with Irish subsidiaries – HRE/Depfa and SachsenLB – triggered German bailouts of €124 billion and €429 million respectively.

Official reports apportion blame on both sides but the rescue costs fell solely on German shoulders: another reason why Berlin is cool on further debt relief for Ireland.

German politicians are well-informed when it comes to the other Irish bone of contention: the refusal of the European Central Bank (ECB) to entertain Ireland imposing losses on bondholders for fear of the consequences. Senior officials in Berlin still share the ECB view that, with ESM bailout funds and other safety nets not yet established, it would have been “reckless” to allow an Irish debt write-down for fear of shock waves across the euro area.

There is some sympathy for Ireland’s criticism of the bondholder episode, if from an unlikely quarter.

“I think the Irish were more or less blackmailed by [ex-ECB president] Jean-Claude Trichet using a competence he didn’t have. They should never have accepted it,” said Mr Carsten Schneider, finance spokesman for the Social Democratic Party (SPD) and a vocal critic of Ireland’s corporate tax rate.

Debt write-downs might have been possible had Ireland come later in the bailout queue, he says, but by then the Bundestag would have been more practiced in influencing Berlin’s political negotiations with programme countries.

In the case of Ireland, says Mr Schneider, that would have meant a more sustained battle on Ireland’s corporate tax rate than was the case in November 2010.

“Berlin didn’t really negotiate, Schäuble simply said the Irish weren’t moving on corporate tax,” he said. “We missed out on an opportunity there.”

So, three years on, what do the Germans think of us? Mostly good things. Now accept the compliment.