Lauren Bullock (17) described as ‘a beautiful girl, a shining light in our school community’

A 17-year-old girl, a 17-year-old boy and a 16-year-old boy have died following a reported crush at a St Patrick’s Day disco at the Greenvale Hotel in Cookstown, Co Tyrone. Video: Reuters 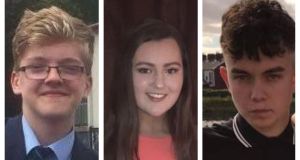 The principal of St Patrick’s College, Catherine McHugh described Lauren Bullock as “a beautiful girl, a shining light in our school community”.

“She was a leader among her peers and a quiet strong and loyal presence. A treasured friend and capable young lady with a bright future.

An emotional prayer service was held on Monday afternoon at St Patrick’s Academy for Connor Currie and Morgan Barnard which was attended by up to 300 students, many of whom had attended the ill-fated event in Cookstown.

The teenagers died in a crush as they waited to gain admittance to an event in the Greenvale Hotel in Cookstown.

A 16-year-old girl is in a stable condition in hospital. Two other teenagers were treated for injuries they received during the incident.

On Monday afternoon the entrance to the hotel remained sealed off while there was a continuing police presence at the scene.

Kyra Coyle, 17-year-old from Stewartstown, Co Tyrone was in the line of teenagers waiting to get into the event when the crush started.

“I was caught in the crush but then I managed to push my way out of the road to get out,” she said. “I looked and at one stage there was ten people, maybe more, on top of each other with one girl screaming to them to get off their friend. It just got worse with people at the back of the line just pushing to the front. It was awful,” she added.

Ms Coyle said she did not know what caused the initial crush. “Everybody just sort of messes around in the line, trying to get forward,” she said.

St Patrick’s College said Lauren Bullock was a member of its Pope John Paul Faith Team and Rosary Prayer Group. “She was a role model for positivity, good relationships and kindness. We have lost someone very dear to us and we will miss her greatly,” the school principal said.

A tribute was also paid by Euphoria Allstar Cheerleading NI, of which Lauren was a member.

The group said in a Facebook post it was devastated at the loss of “the most down to earth, beautiful soul”.

The deaths occurred as several hundred people tried to get into the venue at the Greenvale Hotel in Cookstown after being dropped off by buses.

A 16-year-old girl is in a stable condition in hospital, while a further two teenagers were treated for injuries they suffered during the incident.

People struggled to get off the ground and there was confusion in the immediate aftermath between 9pm and 10pm on Sunday, the Police Service of Northern Ireland (PSNI) added.

Assistant chief constable Mark Hamilton said: “It is a truly awful incident, heart-wrenching for everybody, particularly the families.”

Efforts to resuscitate were made by emergency crews at the scene.

The senior officer added: “Everybody did their best for them last night but it is a truly appalling incident.”

He added: “Unfortunately three are dead, the last person died this morning unfortunately, with his parents near him.”

The nightlife venue in mid-Ulster can take up to 500 people.

Mr Hamilton said preliminary investigations show there was a crush towards the front door of the hotel, and in that crush people seem to have fallen.

Security camera footage is being examined and police have appealed for videos captured by those present.

The senior officer added: “We are examining now to see if the people who have fallen are those who are deceased.

“There seemed to be a little bit of struggling going on to get people up off the ground and that might explain also why there was a report of some fighting.”

Four emergency doctors were deployed along with ambulance officers.

Police made a direct appeal for people with footage of the incident to hand it to police, rather than post it on social media.

Mr Hamilton added: “We are of an open mind... it looks like a crowd of young people, a large crowd, pushing up against the front of the hotel to get in to this event.

“People then seem to have fallen and then got crushed. I would urge you to use that with some caution.

“Certainly it appears to be at the minute a crush, people have fallen and then been fatally injured.

“We are continuing to interview people who were there to establish the full facts and I would appeal to anyone who witnessed what happened to contact police on 101 ext 52014.

“We need parents to talk to their children this morning and encourage them to come and tell us what happened. Please do not post photographs or videos online. Please share them with the PSNI.”

He added: “We need people to come forward and tell us what happened last night. Three young people are dead, they deserve a full inquiry. Their parents need to know what happened to them.”

Police posted on Twitter shortly after the incident, urging parents to pick up their children from the venue in Drum Road.

President Michael D Higgins offered his condolences to the victims' families: “As President of Ireland may I express what I know is the shared grief of the people of Ireland at the terrible loss of life of young students in the tragedy that took place in Cookstown, County Tyrone on St Patrick’s Day.

“May I offer, in particular, my condolences to the families of the victims and to the pupils of the schools in Dungannon that I visited recently.”

Sinn Féin deputy president Michelle O’Neill, who visited the scene on Monday, said there was deep shock. “What is supposed to be a day of celebration has ended in heartbreak and sadness for those involved.”

“People are feeling at a low ebb this morning, it is a huge loss to the community.“Youngsters going out for a night at the disco on St Patrick’s night. Their families think they are safe and then the news turns differently.”

Northern Ireland secretary Karen Bradley said she was “deeply sorry”, saying: “My thoughts and prayers are with their families and friends at this extremely difficult time.”

Ulster Unionist councillor Trevor Wilson said “I spent most of the night at the scene and can say that the emergency services did everything they could to help those who were in distress.

“Young people and their parents have been traumatised and will need a lot of support in the coming days.” – Additional reporting PA