Three British soldiers who died in Iraq from island of Ireland 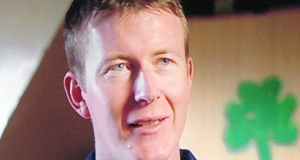 Lance Corporal Ian Malone served in the Ist Battalion of the Irish Guards.

At least three of the 179 British servicemen and servicewomen who died during the war in Iraq were from the island of Ireland.

Lance Corporal Malone (28) served in the Ist Battalion of the Irish Guards and had previously tried to join the Irish Army but was turned down on age grounds.

He was killed by sniper fire during fighting in the southern city of Basra in March 2003. He also served in the UK, Poland, Oman, Canada, Kosovo and Germany.

Lance Corporal Flowers (25), who served with the Royal Electrical and Mechanical Engineers died after a mortar attack on the British army’s Basra Palace base in July 2007.

Captain Ken Masters (40), a father of two girls, served with the Royal Military Police. He took his own life in Basra in October 2005.

Some of the other who died may also have had Irish connections. Some of those killed were involved with the SAS or other British army special services units and details of where they were from were not provided.

An Irish Guards bearer party in British military uniform carried the coffin from the church. The officiating priest, Fr David Lumsden described Ian Malone as “a man of faith, a bit of a philosopher and a manly man”.

The following St Patrick’s Day, the soldier’s mother, May Malone, used a visit to the Irish Guards regiment in south Armagh to condemn the war. She was invited to Bessbrook where Princess Anne presented shamrock to members of the Guards.

“I don’t think the war should ever have happened. It was not necessary. There was no need for the war at all,” she said. “Since the war has ended so many have died, I think it was totally unnecessary.

“I was fairly bitter, but you cannot go through life being bitter because Ian wouldn’t have wanted that – my son was a proud man and very proud to be in the Irish Guards so for his sake I try not to be bitter.”

Ms Malone said it was a great honour to have been invited to the St Patrick’s Day event and to meet her son’s colleagues. “He was very proud of the regiment and he enjoyed every moment of it and he made great friends,” she said.

A gifted chess player, Lance Corporal Malone also had interests in karate, boxing, and skiing, and was an avid reader.

Shortly after the death of Captain Masters his wife Alison said his life could have been saved had he been helped to cope with the great stress he was under.

Ms Masters said her husband loved his job but was under severe pressure. This was reflected in letters which he wrote to her outlining the emotional anxieties he was suffering.

“We are asking far too much of our troops, they are working 24/7 without any help. They are overstretched and attitudes need to be changed,” Ms Masters told the BBC in August 2006. “Depression is an illness, but they really need to look at the stress and having somebody out there to look after them,” she said.

Ms Masters added that her husband’s colleagues had noticed he was not well, but “nothing was done for him”.

Lance Corporal Flowers, a mechanic, was working on a vehicle when his base was struck by a mortar or rocket. Nicknamed “Daz” his commanding officer Major Fabian Roberts described him ostensibly as a “quiet, modest man, who got on with his job with unstinting pragmatism and determination”.

“Yet there was a depth to him intellectually and in his wider personality that made him full of surprises,” he said.

From the Waterside area of Derry he was buried with full military honours in Portstewart, Co Derry where he had lived with his grandparents.