Scuffles broke out as people took part in two rallies outside the Dáil. A protest against new hate speech laws had been organised originally and then a counter demonstration was then organised by unions and anti-racism groups. Video: Bryan O'Brien 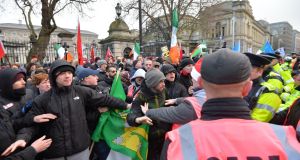 Opposing protests at the Dáil on ‘free speech’ and a counter demonstration on Saturday which led to some scuffles with stewards and gardaí and some arrests.Photograph: Alan Betson/The Irish Times

Three people were arrested during rival demonstrations by anti-racism and free speech groups in Dublin on Saturday.

The arrests followed minor scuffles between the two protest groups which were then separated by a large force of gardaí.

Two men and one woman were arrested. One of the males, a teenager, and the woman were questioned and then received an adult caution.

A second male in his forties has been charged with public order offences and is due to appear before court at a later date.

One of the demonstrations was a protest against proposed new hate speech legislation and was organised by groups including the Irish Freedom Party and Yellow Vest Ireland.

Members of this group chanted: “Listen up and listen clear refugees are welcome here”.

A Department of Justice the consultation process on possible improvements to Ireland’s hate speech laws ended on Friday.

The Government has indicated it intends to strengthen and expand the scope of existing hate-speech legislation, as “one element in a wider suite of measures across all areas of government which are designed to address hatred and intolerance”.

Some forms of hate speech are already a criminal offence in Ireland under the Prohibition of Incitement to Hatred Act 1989.

While severe sanctions are available under the existing law there have been a handful of convictions.