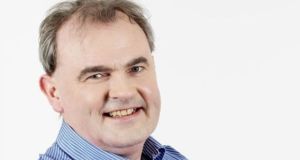 Broadcaster Gareth O’Callaghan who retired from radio last year after he was diagnosed with the neurodegenerative disorder Multiple System Atrophy (MSA) has said he won’t allow the condition to define who he is or what he is “still capable of achieving” in life.

In a lengthy post on Twitter, Mr O’Callaghan said that MSA is a progressive, incurable illness that neurologists and movement disorder experts view as being one of the “cruelest diseases in the world.”

“It’s been a very difficult time. Feels like I’m living my life on two levels. One is where everything has to appear normal, while the other is a complete nightmare where you’re trying to plan for all the awful stuff that lies ahead.

“I’m as strong as I think; but then while I’m not strong physically, I am - if that makes sense.

“The pain can be horrible. It’s mostly at night, but sometimes during the day you want to go home and go to bed. You get dizzy and lose your balance in the supermarket, but you dig deep.

“And you wonder as another night sets in - how long will you sleep for; and how much more can you count on your inner strength to take it all at this point; but then you say ‘bring it on!’

Mr O’Callaghan said he wasn’t afraid of the “cowardly illness.”

I've been away from here for a while. It's been a very difficult time. Feels like I'm living my life on two levels. One is where everything has to appear normal, while the other is a complete nightmare where you're trying to plan for all the awful stuff that lies ahead.

Mr O’Callaghan, who is also a clinical psychotherapist, announced his

A songwriters unplugged concert in his honour occurred at Vicar Street in Dublin late last year. It involved artists such as Paul Brady, Phil Coulter, Brian Kennedy and Tommy Fleming.

to his real high seas adventure with Radio Caroline which broadcasted from international waters to his time at RTÉ’s 2FM and his sojourns in the independent sector with Galway Bay FM and Classic Hits on 4FM.

This followed on from a previous fundraising gig at Cork Opera House last autumn.

had been “a dream job.” However, radio work is stressful and any type

of pressure is like red meat to a shark with MSA, he said.

Initially symptoms of MSA resemble Parkinson’s. However, it then begins

to escalate to blood pressure, swallowing and bladder difficulties. It