The National Homeless and Housing Coalition organised the march through Dublin city centre on the 1st December to help highlight the housing crisis in Ireland. Video: Enda O'Dowd 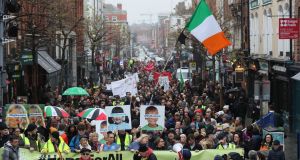 Thousands of people have taken part in a protest march in Dublin to highlight the housing crisis.

The latest figures released by the Department of Housing showed that there 9,724 people accessing State-funded emergency accommodation in October.

The march organised by National Homeless and Housing Coalition took more than an hour to travel from the Garden of Remembrance, to O’Connell Bridge, along the south quays to Dame Street where speeches were delivered from the back of a lorry.

Coalition organisations including unions, left-wing parties, community action groups and organisations working with the homeless then listened to a range of speakers call for urgent political action to end homelessness.

Tina McVeigh, co-chair of the National Housing and Homeless Coalition and a member of Dublin City Council, told marchers it was the fourth anniversary of the death of homeless man Jonathan Corrie “yards from Leinster House”. She said the Government had promised an end to homelessness but the problem remained and numbers had worsened.

“They were able to bail out the banks in a day, it took six hours to nationalise Anglo Irish Bank” she said adding that the “only people who should be sleeping in Garda stations” were not the homeless but “the TDs in Leinster House”. She called for the crowd to join her in a minute’s silence for Mr Corrie.

Michelle Byrne, vice-president for campaigns at the Union of Students in Ireland said students were sleeping in cars outside colleges or travelling for six hours a day to avoid enormous rents. She said people were being “locked out of education because of the price of accommodation. Some 8 per cent of those declared homeless in the 2016 census had been students and there was a national shortage that year of 23,000 student-bed spaces, while the problem had worsened in the intervening years instead of improving.

Ailbhe Smyth told the crowd having a home and a house is not a privilege “it is a necessity and a human right”. John Bissett of Housing Action Now said 70,000 housing units were needed over the next five to 10 years and the Fair Rent Housing Campaign had brought forward plans how this could be achieved. He said the campaign had offered the State a long-term, sustainable and cost-effective solution which was a better alternative than subsidising private landlords to the tune of €3 billion to €5 billion.

The coalition is calling for the declaration of a constitutional right to housing and a recognition of a housing emergency.