Protest over restrictions on disadvantaged and Traveller children 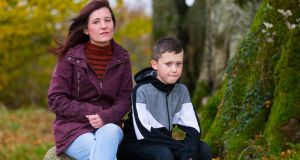 Trish Reilly Nolan pictured with her son Alex near their home in Athlone. Photograph: Tom O’Hanlon.

Traveller and other disadvantaged children are being denied their education by having their hours at school restricted, protestors outside the Department of Education in Athlone heard on Friday.

All the main national Traveller representative bodies were at the protest called by local mother Trish Reilly Nolan, whose son Alex (9) has, since May, been told to attend school for just an hour a day due to what his school has described as “behavioural issues”.

Ms Reilly Nolan says he has had manageable emotional issues and she had sought the support of the school, without apparent success. Placing him on restricted hours has “escalated his distress”. She did not consent to the reduced time-table, she says, and was not advised of her right to appeal. The school did not provide a comment.

After the issue and her case were highlighted by The Irish Times last month, she had been contacted by Traveller parents across the State.

“I came forward to highlight Alex’s issue,” she said on Friday. “But then it took on a life of its own. This seems to be happening across the country. Parents feel they can’t stand up to the schools. And when you have parents who feel vulnerable their children are vulnerable.”

Among those at the protest was Martin Collins, co-director of Pavee Point who said the organisation had been “getting calls from Traveller parents across Ireland worried that this tactic is being used to manage so-called behavioural issues, in some cases without parents’ consent”.

He called on the Department of Education and Tusla, the Child and Family Agency - neither of which monitors the practice of ‘reduced timetables’ - to quantify how widespread it is, and to then issue a directive reduced timetable be used “as a last resort”.

He called on parents whose children were affected to contact local or national Traveller organisations for support.

Bernard Joyce, director of the Irish Traveller Movement said “every child’s right to a full education” must be vindicated, while Brigid Kelly of the National Traveller Women’s Forum said it was “unacceptable that any child should be denied full access to their education”.

A Teachers Union of Ireland spokesman said reduced timetables should only be a last resort but added their use “represents another clear example that, in many cases, schools simply do not have the resources to offer a service that meets the needs of all children”.

A Department of Education spokeswoman said all school pupils were “required to attend for the full day unless exempted for exceptional circumstances such as medical reasons.

“We are working with Tusla and with the Department of Children to examine options to ensure the use of reduced school timetables is limited to circumstances where it is appropriate.”