The Irish living in Wuhan lockdown: A man in a hazmat suit delivers dinner 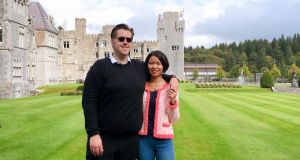 The Irish citizens under lockdown in Wuhan and confined to their homes indefinitely are “feeling the strain” after three weeks, as the coronavirus death toll and infection numbers spike dramatically.

Under stringent new measures introduced in parts of Hubei in an attempt to contain the contagion, many residents are now not allowed to leave their homes.

Previously, one person was allowed to leave every three days to buy groceries.

“Mentally it is getting more difficult. There is no end in sight,” said Mike, an Irishman working in Wuhan who asked to be identified by his first name.

He has now spent three weeks alone in an apartment in the epicentre of the outbreak, and for the past week he has not been allowed outside his apartment door.

His Chinese partner, who is also under lockdown in another city in Hubei, orders supplies for him online and they are delivered to the gate of his compound.

“At nighttime then a man in a hazmat suit will leave it outside and bang on the door. And when he is gone in the elevator I will go outside in my gloves and my mask and pick it up, and then I will bring it out to my balcony and leave it there for 48 hours,” he said.

“If there was a virus on it they say it would be gone in 24 or 48 hours, So I’d leave it there and when 48 hours is up it’s like I’m going to an operating theatre. “I’ll put on rubber gloves and I’ll put on old clothes and I’ll go outside with bleach and hot water, wash down everything, all the bags, and packets, anything that is there. Then I’ll leave them there for another day and I’ll bring them in then. I’ll know it’s safe then, you know.”

Mike’s home is on the sixth floor of a compound where about 5,000 people live. The last time he went downstairs one week ago he was turned back at the door by security guards and had to return to his apartment.

“Somebody was saying, if it keeps on going they will bar the doors up,” he said, adding that piles of rental bicycles had been tied to the gates to prevent people from climbing out of the compound.

The official death toll and infection numbers of the formally named Covid-19 virus surged dramatically on Thursday, with authorities reporting 254 new deaths and 1,367 additional confirmed cases. The jumps brought the combined number of fatalities to date to 1,355 and nearly 60,000 infections.

China’s National Health Commission said the huge increases were because they had broadened their definition for cases to include people clinically diagnosed via lung imaging.

'Nobody is giving us any information. There is nothing coming from the government now'

There are at least nine Irish nationals in Hubei currently and “we are all suffering a bit now, especially the guys that are by themselves,” he said.

“There is no end in sight. That’s the killer. It’s like putting a guy to prison and saying: ‘Look it. you are going to prison’, and he says ‘how long am I going for?’ and they say: ‘well, we don’t know, just go to prison, ok’.”

Those trapped feel a sense of frustration with the lack of official information coming from the Chinese authorities, he said.

State-run media reported on Thursday that the top Communist Party officials in Hubei province and the provincial capital of Wuhan had been fired over their mishandling of the crisis, following unprecedented waves of public anger levelled at the government in recent days.

“Nobody is giving us any information. There is nothing coming from the government now. Now we heard there was two high people in Hubei fired. Now? Very good, five weeks later. That’s the only thing we’ve seen from the government, and propaganda pictures of them in hospitals and stuff.

“You have doctors and politicians going around apologising to people. Give me a break. Tell me how bad the situation is today, and tell me tomorrow how bad it is.”

The Irish embassy in Beijing has been very supportive, he said, and arranged to send him surgical masks and medicines.

“I’ll give credit where credit is due. I cannot fault the embassy in Beijing. I know they have a horrible job now, everybody wants something, and I do hate asking them to do anything for me,” he said, “But anytime I ask them for anything, there is no problem.”

Two weeks ago three Irish nationals were evacuated from Hubei on a flight arranged by the UK government, and the Irish embassy in Beijing and the Department of Foreign Affairs had discussed other alternatives with EU member states.

The Irish who are still in Hubei opted to stay, for family and work reasons. Mike said he does not regret staying and would not evacuate now, if the opportunity arose.

“I feel safer here than I would if I got on a plane for 14 hours. I wouldn’t expect any government to start evacuating people now. It’s putting the people at risk. “The chances of getting infected on a plane would be quite high, so I don’t want to do that,” he said, pointing to the high number of confirmed infections on the Diamond Princess cruise ship currently quarantined off Japan’s coast.

The restrictions in place vary across the province, and Liam Griffey said he was still able to leave his home every few days to go to the supermarket.

“There is no shortage of anything, but an abundance of time,” he said.

The Ennis man is a teacher and is running online classes for his students, who are bored after being cooped up at home for three weeks.

“It’s actually ironic because most of them said before the holiday that they just wanted to stay home and play computer games. I suppose you should be careful what you wish for,” he said.

Conor O’Neill was visiting a rural area in Hubei when the lockdown was imposed, so while the restrictions are not as stringent as in the cities he is finding it tedious as people wait for the situation to improve.

“It’s very frustrating, can’t do anything about the virus though … it’s going alright, just bored mate,” he said.

Michael McGreal is in another district that does not let residents out of their homes. The government sent a notice to say they must stay inside, and if they wanted food they should contact the community management who would “organise contactless delivery” to his apartment.

The current regulations will be in place for at least another 14 days, and for now he and his wife just have to hunker down.

“We are faring ok, but it is more a battle of the mind at this stage of the game. No light at the end of the tunnel at the moment,” he said.

As they try to maintain a semblance of normality in extraordinary times, he and his wife will still celebrate Valentine’s Day on Friday.

“It will be the most basic Valentine’s Day ever I’d imagine,” he said. “A lit candle with a bottle of red, cozy on the sofa watching a movie. Not much else you can do. No steak this year.”

Cooking for one in Wuhan, Mike said he prepares a one-pot meal every so often to keep him going for a day or two, and gets some exercise every day in his home.

“I have a treadmill. I bought it a couple of years ago and never used it, only for drying clothes. Now I get on it for an hour or so every day and I watch TV when I’m walking.”

As he waits in his Chinese home-from-home, and hopes for an early end to the epidemic, he transports himself to another world:

“I’d love a Guinness and a bag of Tayto, that would be the business,” he said. “Back in Westport sitting out by the quay. Lovely, so nice.”