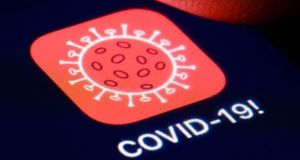 The app has been designed to retain data on the person’s smartphone rather than being centrally collected due to data protection concerns. Photograph: Getty Images

Testing will begin within days on a new smartphone app that is being developed to help trace the spread of Covid-19 in Ireland.

The Health Service Executive (HSE), which originally said the app was due to be launched in April, hired Waterford-based Nearform to develop the app, but has yet to confirm a revised date for its public launch.

At the end of March, the HSE said it would be ready for use by the general public, on a voluntary opt-in basis, within ten days, before pushing back the launch date to the end of April, and then again to the end of May.

In a statement confirming further delays, the HSE has confirmed testing of the app will begin next week before a report into any potential data protection issues is drawn up, ahead of an as yet still to be announced launch date.

Approval for wider public use will also be needed from the Data Protection Commissioner, health authorities and the Government.

The app is expected to use Bluetooth technology to allow a rapid identification of when someone has come into close contact with a confirmed Covid-19 case.

Once someone is diagnosed with the virus, their phone can send a notification to others they have been close with, but the system will rely on people downloading it voluntarily and giving permission for this information to be gathered on their phone.

Earlier this month, Minister for Health Simon Harris said at least one-quarter of the population will have to use the contact tracing app in order for it to have a significant impact on the rate of infection.

The app has been designed to retain data on the smartphone rather than being centrally collected, because of data protection concerns.

The HSE has been working with Apple and Google to ensure the app will work on phones, typically less than five years old.

Take-up of similar contact tracing apps has been disappointing in some other countries, but the technology is seen as a useful supplement to manual tracing of contacts of people who become infected.

Up to 2,000 volunteers are expected to install and use the app for a period of time under the trial and testing period. It will only be available to those aged over 16 years.

One issue with the app has been its inter-operability between countries and “the specific challenge of North-South travel in Ireland and across the Irish Sea”, Mr Harris has said in recent weeks.

In a statement, the HSE said the app will “assist in national contact tracing efforts in the months ahead” and will be launched once “it is fully operational and the necessary approvals” have been received.

“The app is being prepared for field testing which is due to commence next week,” the statement added.

The National Public Health Emergency Team reported on Friday night that another six people had died with Covid-19 in the State, alongside a further 39 diagnoses of the disease.

Gardaí are expected to operate a scaled-down operation this bank holiday weekend to enforce movement restrictions to help curb the spread of the virus, switching its focus from roads to parks, beaches and beauty spots.

The operation is expected to be on a smaller scale to those mounted on the Easter and May bank holiday weekends, which included extra checkpoints and foot patrols to ensure people were only travelling for essential reasons.