Chief Medical Officer Dr Tony Holohan says that he is not surprised that Ryanair chief Michael O'Leary has raised concerns over quarantine measures, but he does not believe that airline travel will return to normal "in the near term." Video: RTÉ 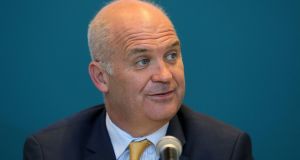 People have been asked to keep a record of who they meet over the bank holiday weekend to help contact tracers curtail the spread of the coronavirus should they be identified as being infected.

The National Public Health Emergency Team (NPHET) on Friday night urged people to comply with social distancing and other rules to slow transmission, even on the bank holiday weekend, with good weather forecast.

Dr Tony Holohan, the chief medical officer, urged vigilance as the country heads into the last week of phase one of the relaxation of lockdown. “Moving into next week, I would urge everyone to look back at the progress we have made over the past number of weeks and maintain our efforts to suppress Covid-19 into the future.”

The public health officials were speaking after Nphet confirmed that another six people have died with Covid-19 in the State, alongside a further 39 diagnoses of the disease. In total, 1,645 Covid-19 related deaths have taken place in the State, with 24,876 cases now having been diagnosed.

As of midnight on Wednesday, data from the Health Protection Surveillance Centre (HPSC) shows that the median age of the 24,837 confirmed cases at that stage was 48 years.

There have been 3,270 hospitalisations, of which 404 cases have been admitted to the intensive care unit (ICU). Dublin has the highest number of cases at 12,023, followed by Cork with 1,464 and then Kildare with 1,416 cases.

Dr Holohan said: “It is encouraging to see ICU and hospital admissions declining, the number of new cases remaining stable and a 90 per cent recovery rate in the community.”

Asked about plans announced by the government on Friday to facilitate the return of childcare, including the introduction of so-called “play pods” in childcare facilities, he said such steps “represent calculated risks”.

“We’ve been taking reassurances from what we’ve observed in other countries that have commenced earlier than us arrangements in terms of childcare and return to schools. There hasn’t been significant change in terms of the transmission of the disease resulting from those.”

As public health officials learn more about the disease, Dr Holohan said he was preparing to add a loss of taste and smell to the list of symptoms that will make someone eligible for a test for Covid-19. He said that, following advice on the matter from the European Centre for Disease Control (ECDC), the new criteria would likely be introduced by the middle of next week.

As the country prepares to enter the last week before the scheduled relaxing of restrictions on June 8th, he said there were encouraging signs, but that data which will only emerge next week will play a key role in determining his advice on moving to phase two.

“We think we need to be presented with three weeks [DATA]to satisfy ourselves that we haven’t seen an increase in transmission of the infection resulting from any of the changes we have made,” he said.

“We haven’t seen anything yet, that’s encouraging, but we’ve another week to go yet.”