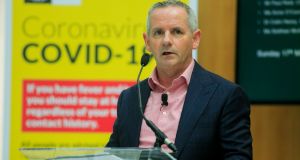 Paul Reid, HSE chief executive: The HSE pointed to large numbers of day cases being treated and argued hospitals were getting busier. The private consultants contended that the private hospitals were on average two-thirds empty. Photograph: Photocalll Ireland/PA

Hundreds of thousands of people covered by health insurance will once again be in a position to be treated in private hospitals from the beginning of July following the Government’s decision not to extend State control over these facilities.

The private hospital deal, though welcomed widely when announced at the end of March in the face of a potential surge in Covid-19 cases, has proved to be extremely costly and highly controversial.

It has left in its wake discommoded private patients, angry doctors, concerned health insurers and may well to be the catalyst for the establishment of a new representative body for private sector consultants.

At the end of March when the Government was looking to take over nearly 20 private hospitals, it was envisaging a scenario of the public system being overrun with thousands of Covid-19 patients seeking urgent care.

The Government’s new plan announced on Friday envisages not a sudden spike in cases which would dissipate, but rather an ongoing epidemic that will be around for the next six to 18 months with the occasional flare up.

The circumstances have changed since April and so have the pressures on Ministers over the agreement.

Under the agreement the State took over about 18 private hospitals including their staff, theatres and facilities. However the deal did not encompass about 600 private sector consultants who have traditionally seen thousands of private patients in these facilities.

These doctors argued they had been shut out of the private hospitals, leaving their traditional patients to join public waiting lists .

The private doctors were offered temporary contracts to work in the State system. About half did not sign up, fearful for their patients and their businesses, they ran a high-profile campaign for the initiative to scrapped .

The good problem for the Government was the private beds were really not needed after all as the much-feared surge never materialised.

The bad problem was that the bills kept mounting.

The HSE pointed to large numbers of day cases being treated and argued hospitals were getting busier . The private consultants contended that the hospitals were on average two-thirds empty.

However the sums involved were enormous. The Cabinet was told on Friday that the bill for three months could be €338 million.

Non-urgent care was closed down at the height of the crisis. The patients who would have been treated remain on growing waiting lists which were already extremely large .

And while numbers in the queue increase, due to social distancing , the numbers who can be physically treated each day will be reduced.

On the other hand, the private consultants maintain that their patients now potentially face their own private waiting lists.

For the health insurers, who have about 2.2 million people on their books, the private hospital agreement changed their business and a series of rebates and financial supports had to be quickly introduced.

However the concern at the top of the industry was if the private hospitals remained for a prolonged further period in State control, subscribers may have begun to question the relevance of having insurance in the first place at a time when thousands are likely to have lost their jobs.

The Government’s solution has been to opt for a halfway house. Give back control of the private hospitals but negotiate a retainer that their capacity can be quickly secured if a Covid surge does come. The State will also want ongoing access to private beds to deal with the growing waiting lists.

Things may begin to get back to some form of normality. However a legacy of anger among doctors at the Department of Health remains.