Taoiseach warns against being ‘overly judgemental’ of SF funeral attendance 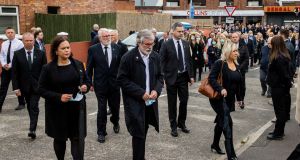 The Taoiseach has warned against being “overly judgemental” of the actions of the North’s deputy first minister and other senior Sinn Féin figures at the funeral of former of IRA member Bobby Storey.

In an interview with the BBC’s Sunday Politics programme, Micheál Martin - who in the past has been an outspoken opponent of the party’s links to the IRA - avoided criticising their presence at the funeral, instead saying that while he fully understood people’s “anger and frustration” at the turnout, as co-guarantor of the Belfast Agreement his “overall perspective on this is to ensure this doesn’t damage or undermine the institutions within the North.”

The attendance of Ms O’Neill and other senior party figures at Mr Storey’s funeral on June 30th, which appeared to break both the coronavirus regulations and social distancing guidelines, prompted the most significant fall-out in the Northern Executive since the restoration of the Assembly in January.

Asked if he thought Michelle O’Neill had been right to attend Mr Storey’s funeral, he said he could “understand why people have a wish and a desire to attend a funeral, albeit we’re all subject to social distancing, we’re all subject to very significant restrictions on funerals,” adding that he had lost “good friends whose funerals I was not in a position to attend.”

However he said “we have to be careful of not being overly judgemental of people’s behaviour, we all have to strive to do the right thing in respect of the public health advice.”

If and when breaches occur, he said, “I think people should put their hands up and say, okay, I understand the anger, I understand where you’re coming from in having a problem with what I did, and I think we all learn lessons then from that and then we have to move on.”

Mr Martin is due to make his first visit to the North as Taoiseach on Thursday. The first minister, Arlene Foster, confirmed on Sunday that she and Ms O’Neill would welcome the Taoiseach to Northern Ireland together, in accordance with the joint status of their office.

Joint media briefings by the first and deputy first ministers, which became an almost daily occurrence during the coronavirus crisis, have not taken place since Mr Storey’s funeral, though business has continued in the Northern Executive.

“The issue around delivering a message on the coronavirus regulations,” Ms Foster told the BBC’s Sunday Politics Show, had been “damaged” by the actions of the deputy first minister and other senior members of Sinn Féin.

“It’s now up to us all to try and rebuild that credibility, and Sinn Féin of course have a major role in that, so it’s important we don’t get distracted by looking at who’s standing beside who but actually do the job of work of government and providing leadership,” she said.

While Ms Foster accepted there were now some “real challenges” and would be difficult to overcome these, “we have to work together because we’re in a mandatory coalition and there are five parties within that coalition so therefore we have to work through the difficulties that are there.”

She and the deputy first minister, she said, looked forward to having a conversation with the Taoiseach on Thursday, and they hoped it would be “productive.” Among the issues they expect to discuss is the scheduling of a meeting of the North South Ministerial Council.

Asked for her reaction to the Taoiseach’s comment that he wanted to “turbocharge” cross-border relations and institutions, Ms Foster replied that she didn’t know if that would be language she would use, but said it was “important that we have a mature relationship, a relationship that is of benefit to both parts of the island of Ireland, but we will be talking about how we as part of the United Kingdom can do that with our neighbours in the Republic of Ireland.”

She did not see the Taoiseach’s shared island unit, she said, as a threat to unionism, because “in the past we have heard from governments in the Republic of Ireland talking about Irish unity, this is about a shared island, and if there’s a recognition that there are two jurisdictions on the island of Ireland then I think that’s a positive step.”

For his part, the Taoiseach said he was looking forward to working with Ms Foster, and said he believed he had a “sense of how, from a political perspective, that I can approach the relationship in a respectful way and understanding the challenges Arlene faces obviously as first minister.

“Likewise I hope to get to know Michelle O’Neill better, I’ve already spoken to Michelle, and notwithstanding the political competition or rivalry within the Republic, I’ve made it very clear that will not interfere with my approach as Taoiseach in terms of the implementation of the Good Friday [BELFAST]Agreement and in terms of the working out of the various activities and initiatives that we would like to undertake together.”

A broker in the North

Challenged on comments by the former senator Ian Marshall, a Northern unionist who said he was “astonished” at the lack of unionists appointed to the Seanad and dismissed Mr Martin’s commitment to a “shared island” as a “farce”, the Taoiseach said he thought it was an “unfair” and a “disproportionate” comment.

“Having a senator in itself isn’t the be all and end all in terms of having a relationship with Northern Ireland, ” he said, adding that he thought Mr Marshall had made a “very constructive contribution” and there was “no issue at all with Ian Marshall, I have to stress that.”

However he said there had been “political circumstances prevailing on this, particularly between the parties that came together to form a government and ultimately those are the realities that all of us have to deal with, but of course engagement with Northern Ireland and with unionism is far wider than that, and will be.”

Asked if his party’s relationship with the SDLP would undermine the Irish government’s role as an “honest broker” in Northern politics, he said he had made it “very clear that as the as head of government and as co-guarantor of the Good Friday [BELFAST]Agreement I will play this down the middle, very honestly, in terms of my discussion and my negotiations, and in my view both are not mutually exclusive at all.

“I think successive parties in the Republic in government have distinguished and made that differentiation,” he said, adding that he would “continue that tradition of honest objective leadership in respect of the North.”

Mr Martin said he continued to criticise demands for a border poll “because I think it would be unnecessarily divisive, I think it speaks to some sort of majoritarian principle which on its own is never going to allow us to share the island in peace and harmony together in the future.”

While it was “easy to call for a Border poll, its easy to call for things,” he said, “I want to move beyond the slogans, the catch-cries, the demands and the calls and rather get something more substantial, more substance, around these issues, an greater understanding of the implications of what some people are calling for and then perhaps to look at practical pragmatic ways of moving forward.”