FF, FG should know Greens willing to walk away from government – Catherine Martin 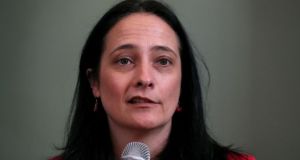 Green Party deputy leader Catherine Martin has said it is important that Fianna Fáil and Fine Gael know that the party is willing to walk away from government. Photograph: : Brian Lawless/PA

Green Party deputy leader Catherine Martin has said it is important that Fianna Fáil and Fine Gael know that the party is willing to walk away from government.

Addressing an online party “hustings” where she is challenging the leadership of Eamon Ryan, Ms Martin said she believed she had shown the other parties during the negotiations over the programme for government, in which she was one of the party’s negotiators, “how hard a deal maker” she was.

Responding to a question about how the party could ensure that the Green Party’s priorities were delivered, Ms Martin said the other parties in the coalition had to believe there was credible belief that the Green Party would walk away if its policies were not being delivered.

She said she did not mean that she would be constantly threatening to end the coalition arrangement.

Mr Ryan said the way to ensure that the Green Party’s priorities were delivered was to “stand your ground rather than walking away”.

What happened at Cabinet was heavily influenced by the work that was done before an issue came to Cabinet, he said.

“You need to work not just with the other parties, but also with the public servants.”

The state was facing into what was probably its most difficult year in living memory, with the Covid-19 crisis and Brexit, and while this created huge challenges, it also created the opportunity “to do things differently.”

Mr Ryan said he would like to see the party’s membership increase to 5,000, and for it to grow its representation on local councils to 100.

The different party “teams”, such as its membership, HQ operation, and its parliamentary party, had to be united so the party could best perform the role it was now playing. He believed he had the experience to get that right.

Ms Martin said that the party had to appeal to people’s hearts as well as their heads, and not scare them with “apocalyptic visions”. Social justice must come hand in hand with climate justice.

Experience should not be put on a pedestal, she said. It could be “a disguise for more of the same, or we know better.” New, calculated risk takers were not “the slaves of experience”.

She said she believed she could instil a new unity in the party which had for too long “been largely led by the mind”. She wants the party to be more led by the heart.

“I do feel that now is the time for change,” Ms Martin said. A new leader was needed “to ensure the same mistakes” are not made as were made the last time the party was in government.

Mr Ryan said he believed the leadership contest was not getting in the way of settling into being in government, but rather was a useful part of that process. “I think the public are with us. I think the Irish public wants to go green.”

The party leader said he came from a “hard core green tradition” and was an idealist. However politics was also about practical matters.

Retrofitting buildings could create 30,000 well paid jobs, and contribute to the issue of social justice, he said. The development of a national land use plan, addressing such issues as water quality, forestry and bogs, would be “crucial” in terms of advancing the Green Party agenda. Transport would be another priority, he said.

The event was the second of three online hustings that are being arranged. Votes have to be returned by July 22nd, and the outcome is expected to be announced on July 23rd.