‘It is a big ask to tell people they have to have a meal. We find ourselves saying ‘No’ to a lot of people’ 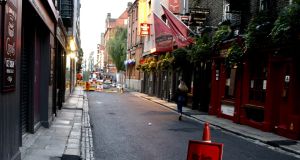 A week is a long time in the life of Dublin’s Dame Lane. The street was near deserted on Saturday night, seven days after large crowds were witnessed drinking in close proximity in scenes that caused serious alarm among public health officials.

It even prompted Taoiseach Micheál Martin to suggest the July 20th date for the reopening of all pubs could be postponed after those serving a “substantial meal” were permitted to take in customers again.

It was the same story across the city this weekend: busy but nothing like it would be on a normal Saturday night.

Temple Bar was shut but for a few pubs and there were roadworks in the central square. There were pockets of liveliness around especially on Camden Street, but the new normal looks nothing like the old normal.

At Dame Lane, a few punters pulled on cigarettes outside J.T Pims which was open on Saturday, but wasn’t the previous weekend.

Manager Daire McLoughlin said his premises only opened on Tuesday.

“It’s clear people want to get out and socialise, but people have to do it the right way. We are all very conscious of what happened,” he said.

“It wasn’t the pubs. It was mostly people with bags of cans. Once people think there is a bit of craic on, everyone is going to immediately converge. It goes to show you that everybody is itching to go out.”

Inside JT Pims there are hand sanitisers and a one way system in and out.

“We are not going to be breaking records any time soon, but it is just good to be open again. Staff are delighted to be working. They are fully trained up and it’s great to see the wood taken down from the window,” Mr McLoughlin adds.

Nearby, the Mercantile Hotel was closed as was the Stag’s Head where two men sat on beer barrels outside smoking cigarettes.Though the Stag’s Head has a restaurant licence, it opted not to open on June 20th.

At the other end of Dame Lane, on the other side of South Great George’s Street, its most famous pub, The George, remains closed, but a small crowd of smokers had gathered outside Berlin, another bar.

One bar worker in the area, who asked not be named, said gardaí were to blame for the scenes in Dame Lane by not moving on the crowd quickly enough but they were out in force on Friday and Saturday to ensure there was no repeat.

At the Trinity Street side of the Dame Lane, the Bankers pub had a sign up saying there was no carry-out drink.

Owner Alan Campbell agreed Garda enforcement was the reason why there had been no repeat of the scenes of the previous Saturday.

“It was disappointing. Dame Lane is a very popular area any time of the year. It was always going to be a bit of a target.”

All the tables looked occupied, but he said they were only operating at a third of capacity. Everybody was asked to leave their mobile number for contact tracing later.

On Saturday three men entered the pub and were abusive to staff when told they must eat a meal so they were told to leave. He was hopeful that pubs would be allowed to open up on July 20th as they used to do.

“It is a big ask to tell people that they have to have a meal. We find ourselves saying ‘No’ to a lot of people. We are in the hospitality business, not the enforcement business,” he said.

The Cabinet is due to meet this week to make a final decision on whether the July 20th reopening date for pubs that do not serve food will go ahead, following input from the National Public Health Emergency Team (NPHET).