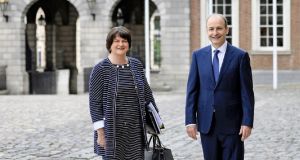 The North’s First Minister has written to the Taoiseach requesting a “fresh examination” into allegations of collusion between the Irish state and the IRA. File Photograph: Julien Behal Photography

The North’s First Minister has written to the Taoiseach requesting a “fresh examination” into allegations of collusion between the Irish state and the IRA.

Arlene Foster said there were “many unanswered questions regarding the role of the Irish state in arming and assisting the IRA in its campaign of terror during the Troubles” and these must be investigated afresh “if we are all to get to the truth of what happened in our shared past.”

These issues were “the responsibility of your administration and with which your Government can assist,” Ms Foster said.

She also requested a meeting with Micheál Martin “in the near future.”

“The Irish Government has stepped up to the plate in relation to these issues. We initiated the Smithwick Inquiry into alleged collusion involving An Garda Síochána in relation to the murder of members of the RUC,” he said.

“The British government did not follow through with the Finucane inquiry, and in our view they should have. That was part of an agreement between Tony Blair and Bertie Ahern at the time at Weston Park.

“So, we are always open to uncovering the true stories and we have nothing to hide from our perspective as the Irish Government.

“I believe people who lost loved ones in unacceptable circumstances deserve all the answers they can possibly get in relation to atrocities carried out by the Provisional IRA or indeed by others as well, and by the security services,” he said.

In the letter, which has been seen by The Irish Times, Ms Foster said she was writing in the “context of the hurt experienced by many innocent victims” who had contacted her in regard to two particular issues – the “publicity” surrounding the UK government’s decision not to immediately order a public inquiry which would investigate allegations of collusion in the murder of Belfast lawyer Pat Finucane in 1980, and a controversial tweet by the Sinn Féin TD for Laois-Offaly, Brian Stanley.

Mr Stanley’s tweet referred to the Kilmichael Ambush in 1920 – when 17 British soldiers and 3 IRA members were killed –- and Narrow Water, near Warrenpoint in Co Down, which killed 18 soldiers, claiming they were “the 2 IRA operations that taught the elite of [the] British army and the establishment the cost of occupying Ireland. Pity for everyone they were such slow learners”.

Mr Stanley later deleted the tweet and apologised, describing it as “inappropriate and insensitive”.

Ms Foster, who previously complained to the Ceann Comhairle of the Dáil about Mr Stanley’s tweet, described it in the letter as “disgraceful”, and said she wanted to thank the Taoiseach for his “swift condemnation” of the social media post, which “caused very considerable offence in Northern Ireland and beyond.

“I have had a number of people contact me from the Republic indicating that Mr Stanley’s views in no way represented their views and he should not be seen as speaking for them,” she said.

The DUP leader raised a number of other Troubles-era killings where there have been allegations of collusion by the Irish state, including the murders of RUC officers Harry Breen and Bob Buchanan as they crossed the Border following a meeting with garda in Dundalk in 1989.

The Smithwich Inquiry found gardaí leaked information to the IRA about two RUC officers. Ms Foster said the tribunal had reported in December 2013 but claimed “to date no further action has been taken.”

She also cited the 1976 Kingsmill massacre, in which ten Protestant workmen were killed by the IRA, as well as the murder of Ian Sproule in Castlederg, Co Tyrone in 1991, and claimed that the Minister for Foreign Affairs, Simon Coveney, had met with families but nothing had been done.

“I believe strongly that if your Government wants to play its role in getting to the truth and thereby assisting reconciliation, then it should seek to urgently assist in the above cases and supply the necessary documentation, as well as examining the recommendations of, and the new evidence that came to light in, the Smithwick Tribunal,” Ms Foster wrote.

Last week both the Taoiseach and the Minister for Foreign Affairs spoke of their disappointment at the British government’s decision not to immediately order a public inquiry into the murder of Pat Finucane.

The Irish government’s position, Mr Coveney said, remained “that only through a full and independent public inquiry will a satisfactory resolution to this case be found.”

Meanwhile the organisers of a meeting about legacy issues at Lambeth Palace in London last month have defended the event after it was condemned as a “secret talks” process which excluded victims.

The former President of the Methodist church, the Reverend Harold Good, and Derry’ City Centre Manager, Jim Roddy, said in a statement that they had asked the Archbishop of Canterbury to host a “seminar” at which Professor Kieran McEvoy from Queen’s University, Belfast, could present a research paper which “reviewed all of the options, that have been placed in the public domain, on how to deal with the past.”

It had previously been presented to the Victim and Survivors Forum.

Political parties were not invited, the organisers said. Among those who attended were representatives from the Irish and British governments, the Sinn Féin official and senior republican Sean Murray and the loyalist Winston Irvine.

Kenny Donaldson, from Innocent Victims United, said it was “shameful” that victims had been excluded.

The Northern Ireland Office said the UK government was “listening to people from all communities, victims and survivors regarding legacy issues, and is committed with our Irish partners to seek a way forward for everyone.

“We are not engaged in ‘secret talks’ with anyone.”