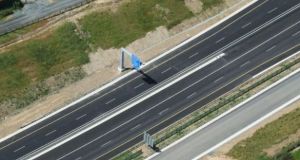 The new 39km-long stretch of the M11 has come in ‘on time and on budget’, the Taoiseach said

Taoiseach Leo Varadkar criticised the “growing anti-roads lobby” when he opened the €400 million motorway bypass of Enniscorthy in Co Wexford on Thursday.

The new 39km-long stretch of the M11 has come in “on time and on budget”, the Taoiseach said. It will cut peak journey times between Dublin and Wexford by 30 minutes, and by 15 minutes off-peak.

The new road would improve journey times to and from the southeast, increase road safety and provide better access to Rosslare port “which could be particularly important in the future” in the light of Brexit.

The bypass, which opened fully to traffic at 4pm, will help to relieve chronic traffic congestion through Enniscorthy, taking 6,000 vehicles a day from its streets.

It is one of two major roads project to open this year. The N25 New Ross bypass will open by the end of this year, when it will include Ireland’s longest bridge, extending 900m (2,952ft) over the river Barrow.

Speaking before he cut the ribbon and travelled the M11 extension towards Oilgate, Mr Varadkar complained that critics are running a “pervasive anti-roads agenda” and creating “false choices” between roads and public transport.

“We need to have both. Of course we need better rail, bus and cycle opportunities,” he said, adding, “we will invest twice as much in new public transport projects as in new roads over the next decade. That’s the right balance I think.

“New roads like this, like the New Ross Bypass, like the M20 between Cork and Limerick, like the N4 to Sligo, or the N5 to Westport, are essential to ensuring that all parts of Ireland can prosper in the years ahead,” he said.

Later, however, residents and traders in the town of Enniscorthy were not overly optimistic about the impact of the road on the prospect of economic recovery for the region.

In the town’s Antique Tavern, owner Karl Forster said tourists from Rosslare have stopped for generations in the town. “Now they will go straight through to Dublin.”

The new road is “one of the things that you can’t object to and be seen to object to” like the smoking and drink-driving ban, because they are good public policy, he said. But businesses have suffered in the past, he said.

Nicky Deacon, in the Berney Saddlery on the town’s quays, said the new road could “make or break” the town. However, Gorey has grown successfully after it was bypassed. “We would be fearful, but we would hope,” she said.

Interrupted as they were fishing on the river Slaney Thursday afternoon, three local men said the pleasant look of Enniscorthy, bedecked in flowers on a sunny day, could be deceptive.

A “lot of businesses” have closed they said, mentioning Davis’ Mill, Buttles’ meat factory, and more recently Alascast and the aluminium firm, Wexal, while there are many closed commercial buildings on Market Square.

However, Shauna Murphy in the the Superior Vape Company on Island Road said many of her customers are locals, so they will not be affected negatively by the bypass.

Another local Agnes Higgins, who lives on Parnell Road, said the traffic congestion did not put people off coming to Enniscorthy. “The town is full of car parks, but there are no jobs,” she said.

Jimmy Gahan of Enniscorthy Chamber said the town had the opportunity to “start on the road to recovery”. A €16 million investment in the town’s waste-water system could see population double.

A new technology park heavily backed by the council on the outskirts of the town could employ 1,000 jobs when completed. Family homes, he said, can be bought for between €180,000 and €240,000.