Taoiseach and Tánaiste defend decision to lift restrictions before Christmas 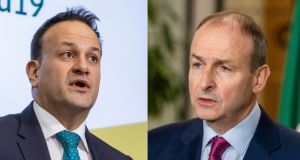 Government leaders have defended the decision to lift Covid restrictions before Christmas, as new cases continue to put the Irish hospital system under significant pressure.

Both Taoiseach Micheál Martin and Tánaiste Leo Varadkar defended the Government’s decisions in separate radio interviews, with Mr Martin saying that it was “unfair” to suggest that the Government should be ashamed of their response to the pandemic while Mr Varadkar said that it was “too simplistic . . . to say that if one thing had been done differently, everything would be fine.”

“If we . . . all knew the situation we’d be in now, would we have gone to Level 3 at all? Perhaps not. Perhaps we would have stayed at Level 5 for a while longer. Perhaps would have tried Level 4 for a few weeks, and reviewed the situation,” he told RTÉ’s Claire Byrne.

Mr Martin told Pat Kenny on Newstalk that the Government had not given “mixed messages” before Christmas and insisted that it had acted responsibly.

“We accept our responsibility, but we have acted at all times in responding effectively to the waves that have emerged,” he said.

They were doing everything they possibly could to get the virus under control again, he said.

There had been “a perfect storm” because of the combination of people socialising at Christmas and the new UK variant of the virus, he said.

Mr Martin pointed to the emergence of the new variant of the virus from the UK as a major contributor to the current surge of infections. He said that the latest testing had showed that 42 out of 92 new samples were positive for the new variant.

Mr Martin said there were some encouraging signs emerging – the positivity rate was going down, referral rates from GPs were going down, the five-day rolling average was beginning to plateau and close contacts of cases were also reducing.

The two men spoke this morning against a background of worsening pressure on hospitals.

Latest figures from the HSE puts the number of confirmed cases of Covid-19 in hospital at 1,575. The number of patients in ICUs stands at 128 and there are 38 adult ICU beds free in the public system.

Mr Varadkar said that it was a “very serious situation”, adding that while there were some hopeful signs that the number of cases going to fall, it will be two to three weeks before we see it manifest in the hospitals. “The situation is still deteriorating and it’s likely to get worse,” he said.

“Eighty per cent of people who go into an ICU in Ireland survive,” Mr Varadkar said.

“It is one of the best survival rates in the world but they won’t be able to continue that level of care if they become overwhelmed if too many patients need ICUs.

“We have thousands of ventilators unfortunately we don’t necessarily have the qualified staff to look after that many ICU patients so the best thing we can all do as members of the public is to protect ourselves and also to help out our health care workers is to make sure that we stay at home.”