Swimming bans in place at Sandymount, Merrion and Dollymount 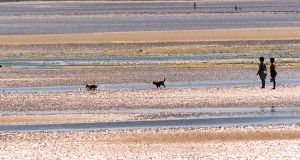 Sandymount strand is one of a number of Dublin beaches where a temporary swimming ban is in place. Photograph: Eric Luke/The Irish Times

Temporary swimming bans are in place at Sandymount, Merrion and Dollymount Strand beaches in Dublin after heavy overnight rains led to sewer and wastewater overflow which contaminated the seawater.

The warning from the Environmental Protection Agency says swimming in these waters may cause illness. It is expected the ban will be lifted within three days.

The HSE has been notified, according to notices on the EPA’s website, www.beaches.ie.

Fingal County Council has also advised swimmers against entering the water at Velvet Strand, Portmarnock “due to storm water overflow as a result of the heavy rain”.

Beach-goers are asked to respect the notice and avoid entering the water.

The warnings come after high levels of rainfall in the east overnight night. The rainfall led to spot flooding in parts of Dublin.

Met Éireann is warning of more heavy rain later this week with longer spells of rain on Thursday and heavy showers on Friday.

Tuesday is set to be a mix of sunny spells and showers with maximum temperatures reaching 16-19 degrees, according to Met Éireann.

Tomorrow will be cloudy, with rain turning heavy in places, particularly along southern parts of the country. There is also a risk of thundery bursts in the afternoon. Highest temperatures will be between 16 to 20 degrees.

However, changeable and unsettled weather will continue for the rest of the week, and rainfall will be above average in many areas, according to Met Éireann.

Early indications for the weekend suggest Saturday will be mostly dry, but rain will move in from the Atlantic and rain will become more widespread on Sunday.

In contrast to Ireland, much of Europe remains in the grip of a heatwave, nicknamed “Lucifer”.

Several deaths in Italy have been linked to temperatures in excess of 42 degrees, while the country reported a 15 per cent spike in hospital admissions.

Deaths linked to exceptionally hot weather were also recorded in Poland and Romania at the start of August.

The European Centre has issued a code red warning for 10 countries due to the heatwave.