Sunniest spring on record in Dublin with rainfall 70% below average 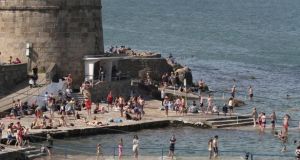 It was the driest and sunniest spring on record in Dublin according to the latest weather statement from Met Éireann. Photograph: Nick Bradshaw/The Irish Times

The weather station at Dublin’s Phoenix Park recorded the driest conditions in at least 170 years, when just 31 per cent of normal volumes of rain fell in the March, April and May. Records were also set for low rainfall at Dublin Airport and Casement Aerodrome.

Along with Dublin, the weather station at Dunsany, Co Meath recorded its driest Spring since records began there, with just 43 per cent of its long term average volume of rain.

Met Éireann described conditions in Dublin as “very sunny, the sunniest Spring on record.” The national weather forecaster also said sunshine levels at all its weather stations across the State were above their Long-Term Average for the season.

But the highest daily rainfall total was actually at Shannon Airport, in Co Clare, where 31mm of rain was recorded on the 9th of March. The number of rain days ranged from 27 days at a few stations to 47 days in Newport, Co Mayo.

High pressure dominated through most of spring 2020, which led to the very dry conditions, especially in the east. Drought conditions were evident until low pressure brought rain countrywide at the end of April.

But high pressure culminated in a very warm, tropical, continental air mass feeding in over the country from the southeast towards the end of the month.

Temperatures were also above average almost everywhere. The season’s lowest air temperature was recorded on March 5th at Dunsany, Co Meath with a temperature of -4.2 degrees and the lowest grass minimum for the season was recorded at Mount Dillon, Co Roscommon on the March 20th with -10.1 degrees.

The highest temperature was reported on the May 30th at Mount Dillon, with a temperature of 26.8 degrees.

The number of days with ground frost ranged from seven days at Sherkin Island, Co Cork to 50 days at Mount Dillon.

Gales were reported on numerous days with up to strong gales reported on the 1st and March 12th, and May 22nd and 23rd.

Overall the outstanding feature of the season was the level of sunshine with the percentage of seasonal sunshine values ranging from 534.7 hours at Cork Airport, to 608.2 hours at Casement Aerodrome.