Organisers of the Dublin parade estimated that about 500,000 spectators lined the streets of the capital for a parade billed as a “celebration of Irish storytelling”. Video: Kathleen Harris 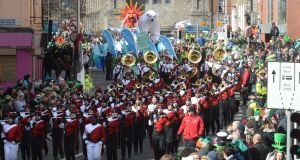 The sun was the biggest star at Dublin’s St Patrick’s Day parade due to its unexpected appearance.

Forecasters had threatened parade-goers with rain and even snow. But the skies stayed blue and the rain held off as hundreds of thousands of people from across the world thronged the streets, cheering floats and marching bands, while themselves parading a dizzying array of comedy hats, glasses, beards and shamrock suits.

There were no comedy clothes for President Michael D Higgins who arrived at his usual viewing spot opposite the GPO shortly after 12.15pm wearing a subtle green tie and a stylish fedora.

As the Number One Army Band played snippets of Riverdance, he was interviewed by Bláthnaid Ní Chofaigh who swam against the tide of green in a bright pink coat and matching gloves.

Once the President and his wife Sabina were seated, the parade could start and this year, for the first time, it started with an Air Corps flyover led by commandant Fabio Scalici. “Is he one of the Dingle Scalicis?” asked a man in the crowd to a ripple of laughter.

Then came the annual outing for the Lord Mayor’s carriage with one of the biggest cheers of the day going to a delighted Dublin City Council worker whose job it was to vacuum up whatever the mayor’s horses had left behind.

The Lord Mayor Nial Ring was equally delighted. “I remember when I was a child, my dad would bring me to the parade,” he told The Irish Times. “We’d come with a ladder and I’d climb it to catch a glimpse of the parade. Never in my wildest dreams did I think that one day I’d be the one in the coach. I’m still pinching myself, to be honest.”

The co-Grand Marshals Deirdre O’Kane and Jason Byrne weren’t pinching themselves but they did look surprised to be leading the parade. “I can’t believe we were asked,” admitted Byrne. “But I think the two of us will do a really good job. We’re really good at waving at people.”

Hours before the parade started, crowds were gathering, with bodies five deep at some viewing spots by midday.

Sean Whelan from St Margaret’s in Dublin was one of the earliest arrivals. “I’ve been here since 8am,” he said, thrilled with his a prime viewing position. “It was an early start for sure but I love it, there was such a buzz even first thing this morning.”

It was a special day for Cindy Fu from northern China. She’s been living in Ireland for 16 years but this year marked her first St Patrick’s Day as a married woman and her last before she becomes a mother.

“I’ve been waiting hours but I wanted it to be special because this is my husband’s first time here. He loves parades and he loves Ireland so far, particularly the weather. He loves the rain,” she said, as he nodded and smiled beside her.

Prabhat Raja Sharma from the Indian city of Assam was full of smiles too. “I’m so excited. It is my first time at the parade and it’s going to be special,” he said, stroking his big red beard and steadying his green hat against a gust of wind.

“It’s just gorgeous now,” she said. “It is a glorious day and the parade is going to be fantastic.”

She said its theme of storytelling had been picked because “it allows all disciplines from dance and visual arts to drama and everything else to really engage. I think we might have to make it a permanent fixture.”

The chief executive of Failte Ireland Paul Kelly said it was a massively important day for the country. “We get tens of thousands of visitors for it but we also get a huge volume of international attention. It really heightens awareness of Ireland at the key holiday booking time.”

More than 3,000 people took part in the parade with floats dealing with big themes including climate change and the age-old problem of how to handle play drums, fiddles and harps which have drown to 5m tall.

The big floats came courtesy of Kildare’s Artastic, Walk the Plank from Dublin and Manchester, Buí Bolg from Wexford, Waterford’s Spraoi, the Inishowen Carnival Group and Dowtcha from Cork. There were also marching bands from Ireland, the United States and one small German town which sent over a full 10 per cent of its total population kitted out in lederhosen.

Once the parade ended the crowd dispersed with thousands making their way to Temple Bar. So large was the volume of pedestrian traffic heading into Dublin’s tourist magnet that the Garda introduced an impromptu one-way system on two of the city’s pedestrian bridges.

“Next bridge guys, next bridge. Sorry this bridge is closed, ” a weary looking garda said as she steered people on the Liffey’s north quays away from Ha’penny Bridge towards the Millennium Walkway. Her stern crowd-control efforts were hampered by the seemingly endless picture requests she was getting.

She said yes to them all. “Ah sure I have to say yes when they ask,” she said. “If I don’t they might think we’re rude and we couldn’t have that.”

Less than an hour after the parade ended, there was standing room only in Temple Bar as thousands of men and women jostled for position and pulled at each other’s beards.

The queue outside Buskers Bar was long and as a good-natured crowd waited their turn for a drink they belted out the Oasis standard Don’t Look Back In Anger. “It’s been like this since Friday,” a frazzled-looking staff member said. “They’re in great form though. Mind you, it’ll get a bit more rowdy as the day goes on.”