Joe Kennedy: ‘I am a strong supporter of the EU and of Nato’

January 31st, 2018: Joe Kennedy III, a politician with a very well-known name but relatively little prominence outside of his home state of Massachusetts, delivered the Democratic response to US president Donald Trump's first state of the union address. Video: Reuters 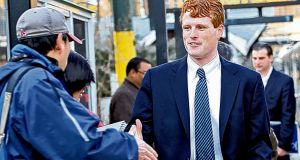 Joe Kennedy III: “We can win without segmenting our society.” Photograph: Suzanne Kreiter

Sitting in a prominent position at last week’s St Patrick’s Day lunch in the US Capitol, was a young redhaired congressman from Massachusetts.

Joe Kennedy III, grandson of Robert Kennedy, was one of the few attendees to be mentioned by name by House Speaker Nancy Pelosi during the annual lunch on Capitol Hill.

The 38-year-old member of Congress is widely seen as a rising star within the Democratic party and a possible future Democratic presidential candidate. He is also a man acutely aware of his Irish heritage.

Speaking to The Irish Times this week in Washington, Kennedy shared some thoughts about Ireland, America and the state of EU-US relations under the presidency of Donald Trump.

Brexit, and its implications for Northern Ireland and the peace process, is something he is well aware of. Kennedy spearheaded efforts last week to write to British prime minister Theresa May ahead of the Taoiseach’s visit to Washington.

Almost two dozen members of congress urged the British government to take account of Northern Ireland and the strides made by the peace process. They warned that a future free trade deal between the US and UK could be delayed “indefinitely” if there was a return to a hard border in Ireland.

Like many on Capitol Hill, Kennedy is treading a fine diplomatic line. He is conscious of the need to protect the so-called “special relationship” between the United States and Britain, while also urging Britain to pursue a Brexit strategy that does not compromise the Belfast Agreement.

“As a member of government in the United States, I appreciate that this is an internal political issue for the British government to try and work their way through, to try to find a path that is going to be best reflective of the desires of the people of Britain. Indeed it is their obligation to do so. However, the potential consequences are going to have ramifications for millions of people around the world, particularly for Ireland and Northern Ireland and potentially the United States,” he says.

The purpose of the letter to May, he says, was to highlight the fact that a significant number of members of Congress believe the achievements of the Belfast Agreement must be protected.

“The decision by the British parliament potentially puts a lot of that success into question,” he says.

Kennedy is also cautious on the prospect of a future US-UK trade deal. “Congress has a very full plate already. This administration is in the midst of negotiations with China, they have just finalised updating Nafta [the North American Free Trade Agreement between the US, Canada and Mexico] which still has to be approved by Congress, and there is ongoing talk about a possible agreement with the EU. The idea that Congress is going to somehow shift immediately to a free trade agreement with Britain is one I’m not certain about.”

While personally respecting the British government’s obligation to implement Brexit, he himself is an advocate for the European Union. “I am a strong supporter of the EU, of Nato and the ideas that form a core foundation of those alliances,” he says.

Trump’s scepticism towards multilateralism has in fact strengthened support for these institutions in Congress, he says. “There has been a bipartisan rejection of the present philosophies from both the Senate and the House and from current and former senior diplomatic and military figures.”

As for his own Irish heritage, Kennedy says the St Patrick’s Day lunch on Capitol Hill is one of the strongest examples of bipartisanship to be seen in Washington with Democrat and Republican members of the House and Senate coming together to celebrate the ties between the US and Ireland. That relationship is an “active and living thing,” he says.

“My family’s Irish heritage is something we hold quite dear, it is something that is extremely important to me, as well as the Irish diaspora in Boston and Massachusetts more generally.”

Kennedy has visited Ireland, including a 10-day trip with his wife in 2014 when he travelled to the east and west coasts and visited his family’s homestead in Co Wexford.

As for his own political ambitions, Kennedy says he will not be running in 2020, though there are expectations he may be a presidential candidate in the future.

At 38, he is still young and a relative newcomer to Congress, having been elected six years ago. Before following in the footsteps of so many of the Kennedy dynasty and turning to politics, he studied at Stanford and Harvard, worked as a prosecutor, and also spent two years in the Dominican Republic with the Peace Corps, the organisation established by his grand-uncle, John F Kennedy.

A close friend of Beto O’Rourke, who announced this week he is running for the Democratic nomination, Kennedy is also strongly supportive of Elizabeth Warren. He met his future wife when both were law students of hers at Harvard. As for the secret to Democrat success in 2020, Kennedy pushes back on suggestions that the Democratic race is about a battle between the progressive or moderate wings of the party.

“Any Democrat that falls into the trap that we have to speak to a certain slice of the American electorate is doomed. Our history shows that we have always been a big-tent party and, when we have celebrated the diversity and differences that Americans have to offer, we win.”

He believes this is what it will take to tackle Trump in 2020. “We can win without segmenting our society. When you start talking about leaving votes on the table we’ve already lost.”