A pay dispute at Iarnród Éireann, which has halted train services around the country today, could drag on until Christmas and into the New Year, trade unions have warned. 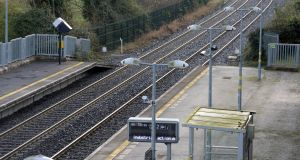 Empty tracks and train platforms at the Navan Parkway station as a result of strike action by Iarnród Éireann over pay. Photograph: Alan Betson/The Irish Times.

The pay dispute at Iarnród Éireann, which halted train services around the country on Wednesday, could drag on until Christmas and into the New Year, trade unions have warned.

Union officials said industrial action would continue until the Sate-owned rail operator made a credible, no-strings-attached pay offer for the firm’s 3,800 staff.

Unions said there was a “chasm” between their position on pay and that of the company at the moment.

Tens of thousands of people experienced disruption as a result of the 24-hour strike. Further stoppages are set to take place next Tuesday; on Tuesday, November 14th; on Thursday, November 23rd; and on Friday, December 8th.

There appears to be no immediate prospect of any further intervention to resolve the dispute.

Speaking during a visit to the US Taoiseach Leo Varadkar said this strike, as all transport strikes are, will be resolved. “It’ll be resolved after an engagement with the WRC and possibly the Labour Court, ” he said.

“And the deal that comes out at the end of that process will probably be no different than if there’d been no strike at all. I think it’s unfortunate that in the transport sector it seems it’s impossible to come to an agreement without a few days of strike. This is inconveniencing 150,000 people every day. People who in very many cases don’t have an alternative. This is a strike that affects people who have very few alternatives,” he added.

Unions blamed the Minister for Transport Shane Ross for “sitting on his hands” for five months despite warnings that a strike was looming.

Dermot O’Leary, general secretary of the National Bus and Rail Union, said under no circumstances would workers at Iarnród Éireann fund their own pay rise by agreeing to additional productivity.

He said the company’s “miserly” offer of a 1.75 per cent increase would not resolve the dispute. “What will fix this dispute is a credible offer with no strings attached. That is very, very clear. “

He said if it took the planned five days of strike action or even more stoppages to bring about such a pay offer, then that was what would happen.

“Unfortunately that could drag us into Christmas and on into the New Year.”

Unions are seeking annual pay increases of about 3.75 per cent over three years – along the lines of the rises secured by staff in Dublin Bus and Luas after industrial action last year – without the provision of additional productivity.

They contend that staff are effectively subsidising the underfunding of the company by the Government and the National Transport Authority.

Iarnród Éireann says it has accumulated losses of nearly €160 million and that agreeing to the pay increases being sought would “effectively be trading recklessly”. It argued that conceding to the unions’ claim would cost an extra €43 million over three years and push the company into insolvency.

The company again stated on Wednesday that a clear opportunity was available to the unions to avoid further disruption by taking their pay claim to the Labour Court.

Siptu organiser Greg Ennis said staff had already delivered significant productivity increases. He said there were 1,000 fewer employees in the company than there were six years ago and that its payroll costs had reduced by 22 per cent.

Mr Ennis said the Minister had done nothing with a report drawn up by the National Transport Authority which said the rail operator needed further investment of €103 million per annum for five years.

“He is absent without leave at this stage. He has done nothing and we end up in a situation that our members, who do not want to be discommoding the public, are left with no option but to withdraw their labour,” he said.

In a letter sent to the board of the overall CIÉ group - of which Iarnród Éireann is a subsidiary - unions urged it to advise the rail company to “do the right thing and make a credible pay proposal in order to prevent further industrial unrest”.

David Franks, Iarnród Éireann’s chief executive, said staff would lose about €1,200 in wages if the five strike days went ahead and if industrial action evolved into a more sustained campaign “each employee could see lost earnings running into thousands in the run-up to Christmas”.

Mr Franks said there were clearly “unresolved issues” between the company and trade unions and he said Iarnród Éireann was prepared to go to the Labour Court to seek a recommendation.

Mr Ross on Tuesday urged all parties in the dispute to engage in constructive and realistic negotiations.

Asked about a possible ban on strikes Mr Varadkar said: “I never proposed to ban strikes. What I have proposed is a mechanism by which we can resolve long-standing disputes. This is something that is done in other countries, is to make Labour Court findings binding. So if a strike is protracted, goes on for a long period of time and the public are being inconvenienced then it can be referred to the Labour Court for a ruling everybody would have to abide by. It’s something I would favour but it’s not in the Programme for Government and it’s not even Fine Gael policy at this stage. It certainly won’t resolve this strike.”