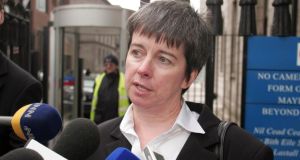 Louise O’Keeffe: successfully sued the State in the European Court of Human Rights in 2014 for failing to protect her from sexual abuse by principal Leo Hickey while a pupil at Dunderrow national school in west Cork. Photograph: Garrett White/Collins.

The State risks another challenge by a school sex abuse victim in the European Court of Human Rights because of the narrow way in which it is interpreting the judgment in the Louise O’Keeffe case, a leading law lecturer has warned.

Dr Conor O’Mahony of the faculty of law in UCC told The Irish Times that Ireland had chosen to interpret the judgment in Ms O’Keeffe’s case in a very narrow way. It had focused on the ECHR’s comments in relation to a prior complaint being made but not acted in relation to the teacher who had abused Ms O’Keeffe.

Ms O’Keeffe successfully sued the State in the ECHR in January 2014 for failing to protect her from sexual abuse by principal Leo Hickey while a pupil at Dunderrow national school in west Cork.

“Basically there are two aspects to the ECHR judgment: on the one hand, the judgment refers to the fact that in Louise O’Keeffe’s case there had been a prior complaint – another victim had made a complaint before Louise was abused in Dunderrow national school in the 1970s,” Dr O’Mahony said.

“That’s one side of it but the judgment also refers – and the ECHR has referred in other judgments – to the idea that the State is also liable for abuse which it fails to prevent where it either did know it was occurring or – and this is the key point – where it ought to have known it was occurring.

“If the whole system revolves around waiting until a complaint has been made and only kicks in at that point, then you are effectively waiting for abuse to happen, and a child has to be abused and a complaint made before the State is deemed liable.

“The State is effectively saying that, in a case like Dunderrow where lots of children were abused, it is telling the first victim, ‘Tough luck, there is no liability in your case because no complaint was made until you made your complaint although we are liable for later victims’.”

According to Dr O’Mahony, the interpretation of the ruling taken by the State focuses solely on reporting and detecting abuse but fails to acknowledge that the ECHR judgment also stresses the State’s role in protecting children.

Dr O’Mahony, who with colleague Prof Ursula Kilkelly and the Child Law Clinic at UCC, supported Ms O’Keeffe in her case, said she had highlighted the State’s awareness of systemic abuse in the primary school system in the Carrigan and Ryan reports.

This was acknowledged by the ECHR in paragraph 125 of its judgment when it said the State should have put in place measures to protect children and other vulnerable persons from “ill treatment of which the authorities had or ought to have had knowledge”.

“The whole interpretation of the ECHR by the State is extremely narrow and minimalist and ignores the broader systemic problem and the issue of prevention and instead focuses solely on the issue of reporting; in my view, it is potentially open to challenge in a future case.”