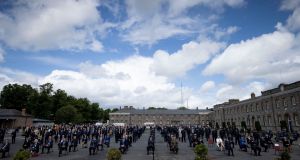 A State ceremony and minute’s silence is held to mark the funeral of Detective Garda Colm Horkan outside the Garda Headquarters in the Phoenix Park, Dublin. Photograph: Tom Honan 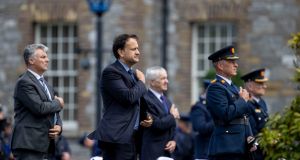 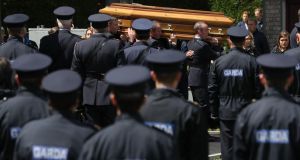 The coffin of Detective Garda Colm Horkan is carried from St James’ church to the cemetery in Charlestown, Co Mayo at his funeral on Sunday afternoon. Photograph: Brian Lawless/PA Wire

A minute’s silence was observed at Garda stations around the country on Sunday in memory of Det Garda Colm Horkan as his funeral took place in Co Mayo.

The funeral for the 49-year-old, who was shot dead in Castlerea, Co Roscommon on Wednesday night, took place in Charlestown, Co Mayo on Sunday at noon.

Gardaí lined the streets as the coffin of their colleague was carried through his home town. Six gardaí carried the coffin into the church for his funeral.

Outside each Garda station, members of An Garda Síochána paraded in front and were brought to attention at noon to observe a minute’s silence.

Taoiseach Leo Varadkar and Tánaiste Simon Coveney joined hundreds of others at Garda headquarters in the Phoenix Park to pay their respects .

Proceedings in Dublin began just after midday when hundreds of gardaí as well as representatives from the Department of Justice, the Defence Forces and the Navy as well as members of the Policing Authority turned to face a tricolor flying at half mast in the shadow of a granite memorial to members of the Garda who had lost their lives while on duty.

After the impeccably observed silence, the socially distanced gathering watched the State funeral which was broadcast live on a large screen outside the headquarters.

After the personal tribute paid to Mr Horkan’s by his brother Brendan the assembly broke into sustained applause after which Mr Varadkar signed the book of condolences before leaving.

Sgt Sinead Riley, the Sergeant-in-Charge at Áras an Uachtaráin, rang the Peace Bell at the start and the end of the memorial ceremony, while the President observed one minute’s silence.

Firefighters, paramedics and coast guards also paid tribute to Det Garda Horkan by marking the minute’s silence, as did staff at the Midlands prison. Prison chaplain Fr Larry Kelly spoke a few words in memory of the late garda following the moment of silence.

Several GAA clubs around the country flew their club colours in his honour, to commemorate the garda’s heavy involvement with Gaelic football over the years.

As a mark of respect, the national flag was flown at half-mast at several Government and State buildings on Sunday, including Áras an Uachtaráin and the Department of Housing, Planning and Local Government.