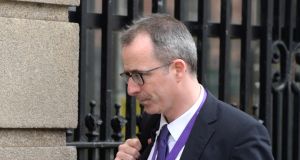 Jim Breslin, secretary general of the Department of Health, said ‘very significant changes’ were needed in how we care for our most vulnerable older people. Photograph: Dara Mac Dónaill/The Irish Times

There was no discrimination against the private nursing home sector by the health service as the Covid-19 pandemic emerged, the secretary general of the Department of Health has said.

David Cullinane of Sinn Féin said private nursing homes had felt exasperated and let down by the HSE and the Department of Health in February and March over a lack of personal protective equipment (PPE), aggressive recruitment of their staff and the discharge of patients from acute hospitals to their facilities without testing for coronavirus. He said some nursing homes had claimed staff had resorted to using painters’ overalls as protective equipment.

Mr Breslin insisted that there had been considerable engagement between the health service and private nursing homes at the time and this was set out in official correspondence.

He said in relation to supports being sought by private nursing homes, the HSE and the Department of Health were working within constraints.

“The supports that they were critical of were in a situation where the HSE and every health system internationally was seeking to mobilise supplies that were not readily available.

“That was being experienced right across all sectors in the health services.”

HSE chief executive Paul Reid said the executive had provided PPE to private nursing homes to the value of about €27 million. He said a further €26 million was likely to be spent by this month on other nursing home costs.

The committee also heard that an official deadline for nursing homes and community hospitals to meet regulations on their physical environment was unlikely to be met.

Independent TD Michael Collins said the Government had set a target of 2021 for community hospitals to have 80 per cent single room occupancy.

Mr Breslin said this was “going to be difficult given what has happened with the construction sector over the course of this year.

“Many completely new facilities have been put in place and many refurbishments have been undertaken but to make it by that deadline I think it is certainly not the most probable outcome at this stage”.

Mr Reid told the committee the HSE would learn from the experience of dealing with Covid-19.

He suggested that “very significant changes” were needed in the models of care used at present to care for our most vulnerable older people.

He said a concerted effort was required involving policy makers, regulators, providers and clinical experts to achieve a safe and sustainable model of care into the future.

Mr Breslin said facilities in nursing homes might look quite different in the future.

“In the past we thought making big living rooms where people could have activities and socialise was the way forward. Actually we have to re-think that now in the light of this infection.”

The HSE chief also warned that while the Covid-19 virus was currently “under control”, it had not gone away and there was “the risk of a second wave as the country further opens the economy and society”.

Mr Breslin told the committee that new cases of Covid-19 in nursing homes had steadily decreased.

“Today, 50 per cent of all nursing home clusters are closed, meaning they have been Covid free for 28 days or longer.”