Antoinette Keegan survived the Stardust nightclub fire in February 1981 but lost her sisters Mary and Martina to the blaze in which 48 people died and 214 were injured. Video: Bryan O’Brien 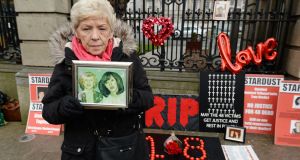 Christine Keegan holds photographs of her daughters Mary and Martina outside the Dáil on the 37th anniversary of the Stardust fire, in 2018. File photograph: Alan Betson/The Irish Times

Long-time campaigner for those killed in the Stardust fire Christine Keegan has died, her family has confirmed.

Christine Keegan’s two daughters Mary (19) and Martina (16) were killed in the fire, and she had been one of the leading campaigners for justice in relation to the incident for much of the last four decades.

Her daughter Antoinette Keegan heads up the Stardust Victims Committee, which last year succeeded in obtaining a fresh inquest into the deaths of the 48 victims.

The fire at the Stardust nightclub, in Artane, north Dublin, on the night of February 13th/14th, 1981, remains the worst fire disaster in the history of the State. It occurred during a Valentine’s Day disco, and killed 48 young people and injured more than 200 others, primarily from Dublin’s northside.

Christine Keegan died on Tuesday evening. In the hours afterwards her family had been inundated with condolences “from everywhere, as far as Australia”, her daughter Antoinette said.

Antoinette said her mother was “a true fighter, a true legend, a true warrior”. “She has been a rock that we all leaned on,” she added.

“The one thing she wanted was an inquest, and we’re going to have that now. She will get justice,” she said. “But for now she’s gone to my father, and my two sisters.”

The Stardust fire broke out shortly after 1.30am on February 14th, apparently in a first-floor storeroom containing drums of cooking oil, sodium-chlorate toilet cleaner, reams of paper napkins and plastic cutlery.

A fireball subsequently swept through the club, spewing smoke and molten debris on more than 800 young revellers inside, mostly from Artane, Kilmore and Coolock.

Inquests were held into the fire in 1982, returning explanations as to the causes of death but no verdicts.

Investigations into the fire showed that a number of escape routes from the dance hall were blocked, as emergency doors were locked by chains.