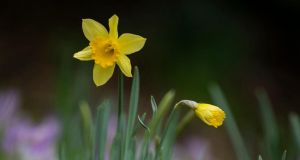 Spring’s second coming will continue this weekend with temperatures well above normal for the time of year.

Temperatures reached an unseasonable 16 degrees in Dublin on Friday. That is eight degrees above the monthly average.

It will not be so warm over the weekend, and there will be a chance of a shower or two, but it will still feel pleasant for the middle of February.

Highest temperatures on Saturday will be 10 to 12 degrees, although it will be notably more windy in coastal areas.

Similar temperatures can be expected on Sunday as rain spreads eastward across the country. Sunny spells and showers will follow for the afternoon.

Met Éireann forecaster John Eagleton said the warm weather will dissipate next week and that there will be a return to more normal temperatures values for the time of year.

“Friday was peak spring. We will see frost on Monday night. We had a cold week recently, but things have improved since then. The good weather has been well signposted,” he said.

Spring weather emerged first in the New Year as temperatures of 13 degrees in some places marked one of the mildest starts to January in living memory. Butterflies were spotted, and spring flowers came into bloom.

This was followed by more normal conditions for the time of year with the lowest temperature, -5.8 degrees, recorded at Dublin Airport on January 31st.

Early February saw much of the same kind of conditions, but temperatures have been rising over the past week, heralding the return of spring weather.

Boris Johnson confirms Santa is ‘ready and raring to go’ 13:42
Recipients of PUP to get Christmas bonus on December 8th 13:36
December sky: Jupiter and Saturn to appear closest to each other since 400 years ago 13:33
Woman threw TV off balcony injuring person walking below, court told 13:26
‘No evidence’ acting on expert report in 2016 would have helped Debenhams staff 13:22