Sonny Knowles funeral to take place in Crumlin next Wednesday 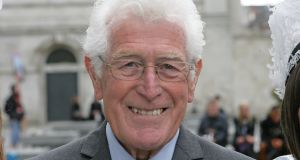 The funeral of Sonny Knowles will take place in Dublin next week. Photograph: Collins

The funeral of the popular entertainer Sonny Knowles, who died this week aged 86, will take place in St Agnes’s Church on Wednesday, November 21st in Crumlin.

Knowles was born November 2nd, 1932 in Dublin’s Liberties to Tommy and Mary Knowles, and started playing the clarinet and saxophone at the Dublin Music School.

He trained as a tailor before going professional in music. He joined the Johnny Butler Band in 1952 and in the 1950s was a clarinet and sax player in bands such as the Earl Gill Showband – playing sax and also singing – where he earned equal billing with lead singer Sean Fagan.

He was also in the Pacific Showband, which broke up in 1968, and the Clubmen.

Knowles went solo at the peak of the cabaret era in Ireland, and recorded and released eight albums for Pye, which continued to sell into the mid-1990s.

Knowles had two songs in the 1966 Irish National Song Contest. He also performed regularly with orchestras, and played at the Split International Song Festival in Yugoslavia in 1973. He also toured in the US and Europe.

Knowles is probably best remembered for his Irish TV appearances, including presenting RTÉ’s variety series Cabaret for three years and as a regular guest on other shows over many years.

In 1989 Knowles received the ‘Man of the Year’ award from the Dublin Society of New York, and in 1999 he received the Hall of Fame Award at the National Entertainment Awards show.

Knowles is survived by his wife Sheila, his children Geraldine, Gary and Aisling, his grandchildren and great-grandchildren.

His funeral mass will take place at 12pm in St Agnes’ Church in Crumlin Village on Wednesday, November 21st.

The family has requested that any donations be sent to the Irish Cancer Society and the Alzheimer Society of Ireland.