Leixlip shooting: ‘It was only when you see the Garda cars coming that you realised what happened’ 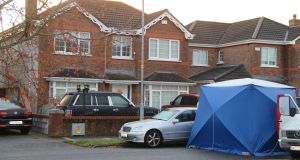 It is a common refrain when a shooting happens for neighbours to state that they never thought something like that would happen in their locality.

Glen Easton Way in Leixlip really is the type of place that would be far from anybody’s idea of where a suspected gangland killing would happen.

This red-bricked estate dates from the late 1990s. The grass verges and green spaces are very well kept. From first light residents left to go to work. These are the people who get up early.

Later, parents with their children to go to school. Many slowed down at the entrance to the estate where a blue tent was erected outside No 36 Glen Easton Way, the home of Clive Staunton (50), who was murdered outside his home on Thursday night.

The children of his next door neighbour, Shane Cody, had to lift up police tape outside their home to get a lift to school.

Mr Cody described Mr Staunton as a “lovely fellow and a great neighbour” whose wife died last year. Mr Staunton had been living in the estate for at least five years.

“I wouldn’t mind, but I was only speaking to him earlier in the day. He was always in great form. He always had a smile on his face,” Mr Cody said.

Mr Cody said it was “shocking” that something so violent could happen in their neighbourhood.

“It’s a nice area. Stuff like this doesn’t happen here,” he said. “I would be very surprised if he [Mr Staunton] was involved in any of that [gangland stuff]Garda cars coming that you realised what happened,” he said.

“You wouldn’t hear much from him. You would just see him bringing stuff in and out from the van,” the neighbour said.