Taoiseach Leo Varadkar has visited parts of Athlone and Carrick On Shannon that have been hit by recent flooding. Video: Bryan O'Brien 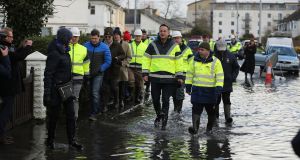 Taoiseach Leo Varadkar is pictured during a visit to Athlone with Minister of State for the Office of Public Works Kevin Boxer Moran to observe the impact of recent flooding in the area. Photograph: Nick Bradshaw/The Irish Times.

Met Éireann has issued a snow and ice warning for the whole State with the weather forecast to become much colder from Tuesday.

The forecaster said “wintry showers, mainly of hail and sleet, will become increasingly widespread during Tuesday leading to icy patches” and that “some snow accumulations will also occur”.

The warning comes into force at 6am on Tuesday and remains in place until 9am on Wednesday. The forecast anticipates bitterly cold conditions with daytime highs of 3 to 6 degrees and freeing temperatures at night.

The weather warning could be extended for longer as the rest of this week is expected to cold and there is a chance of further sleet and snow in Ulster and Connaught.The long term forecast shows the cold weather extending in March .

Water levels along the River Shannon have risen again after another night of heavy rain. Some 20mm of rain fell in the 12 hours from Sunday evening to Monday morning in the Midlands area, exacerbating an already difficult situation.

Water levels at Athlone had risen by more than 10cm (four inches) between Sunday and Monday to a new level of 5.4m (18ft), some 1.6m higher than its normal levels, though they have levelled off by 3pm.

Over eight inches of rain has fallen in the past three weeks causing flooding along the River Shannon, particularly in Carrick-on-Shannon and around Athlone and Cloonlara, Co Clare. Flooding has happened but the levels have not yet reached those seen in December 2015, which has been attributed to new flood defences since constructed.

Taoiseach Leo Varadkar and Minister of State for the Office of Public Works Kevin ‘Boxer’ Moran were met by irate residents and farmers during a visit to Athlone, Co Westmeath on Monday to see the extent of the flooding there.

A number of people angry abour persistent flooding confronted the Taoiseach when he visited the banks of the Shannon at Wolfe Tone Terrace in Athlone.

They claimed little work had been done to prevent flood waters from entering their homes and land since the late 2015 flooding event.

Taoiseach @LeoVaradkar and OPW Minister @kevinboxermoran are met by angry residents from near the river Shannon in Athlone who say little has been done to alleviate flooding since last major event four years ago. pic.twitter.com/giYwVMx5Ub

Mr Varadkar told reporters that the Government had committed to invest €1 billion in flood defences and 98 different projects were underway around the State. He said this work would become more necessary in the future.

However, a number of local residents told Mr Varadkar and the Minister that they were in the same situation as in late 2015 and since another major flooding event in 2009, where their lands and homes suffered water damage.

When told remedial work would be done but this would take time, Gertie Dunning from Carrickbrien near Athlone told Mr Varadkar and Mr Moran she did not have 10 years to wait.

“The flooding is four inches from my door as I came out this morning. By tonight it will be at the door,” she said. “I am in my 60s. Where will I be in 10 years? No, the OPW have insulted us with what they have given us...It happened four years ago and in 2009 and nothing has been done, absolutely nothing.”

Mr Varadkar there was a plan both for the future and for now, and he praised the OPW and local authorities to the manner in which they had responded quickly to the flooding threat.

He also said the Defence Forces would be deployed in the coming days, especially in cut-off rural areas.

He added that part of the solution in future would be relocating those living in isolated homes that were prone to flooding. Saying 20 households had already signed up, he added: “It makes sense to spend tens of millions of euro to develop flood relief works in a town like Athlone. It would not make sense to do that just for one house. Everybody understands that. For some people, the best option is relocation.”

In Co Clare, the Springfield area of Clonlara was submerged on Monday, causing significant problems for the 13 families who live there.

As he watched the River Shannon swallowing up his garden and driveway, Pat Mason said the only way he would consider leaving the area would be in a coffin.

“The only we they’ll get me out of here is in a box,” he declared. “I’m ready for the battle again.”

Despite the best efforts of Clare County Council workers in building-up the flood defences using sandbags, residents have started pumping water out of their gardens and driveways.

The ESB, which operates the Parteen Weir located upriver from Clonlara, increased the flow of water to maintain safe levels within the dam.

However, the knock-on effect is large scale flooding along the lower Shannon Basin, including Clonlara.

Mr Mason, clutching a life-jacket that he purchased following floods in 1995, showed photographs of his flood-hit bungalow from times past.

Local roads were impassable by car in the area and farmers ferried water bottles to cut-off homeowners. Clare County Council delivered portaloos to residents whose septic tanks and water wells were backed up by the floodwater.

Sean Lenihan, a senior engineer with Clare County Council, said the local authority was hopeful of resubmitting an application in the next “two to three weeks” to construct a 2km mud embankment and pumping station to try to alleviate flooding.

A previous application to build the proposed local flood defence was withdrawn after an objector raised concerns about the ecological and environmental impact of the development.

“We went back to the drawing board to make sure we had addressed all those issues and we are happy that we have,” Mr Lenihan said.