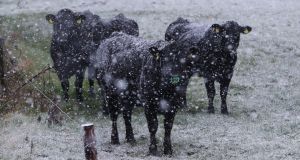 A status yellow weather warning for snow and ice remains in place nationwide until 9am, but has been extended to noon on Thursday for counties Donegal, Leitrim and Sligo.

Met Éireann warned of showers of hail, sleet and snow continuing throughout Wednesday and early Thursday in those regions, leading to icy patches. It also said there would be some snow accumulations on higher ground.

Road temperatures are just below zero so black ice may be an issue in sheltered areas.

It urged motorists to take extra care on all routes and to slow down and avoid any harsh manoeuvres in icy conditions. It said motorists should never drive through floodwater unless sure it is not too deep for their vehicle.

In the midlands, the Nenagh/Terryglass Rd (R493) is closed at Ballinderry due to flooding, while flooding has also closed the N65 between Portumna and Borrisokane near the turn-off for Terryglass (R493). Diversions are in place.

Elsewhere, the Borrisokane/Cloghan Rd (R438) is closed between the Portumna turn-off at Walsh Park Cross and the Banagher turn-off at Taylor’s Cross due to flooding.

Irish Rail also highlighted high water levels, and said bus transfers remain in place until further notice on the Limerick/Galway route between Gort and Athenry. Rail services are operating between Limerick and Gort, and between Athenry and Galway.

The overall national forecast for Wednesday is for any frost, ice and patchy lying snow to gradually thaw throughout the morning.

A cold and bright day will follow, with sunny spells and scattered showers. The showers will be mainly a mix of rain, hail and sleet, but a few snow showers are still possible, mainly in parts of the north and northwest.

Cloud will thicken from the Atlantic this afternoon and rain will push into the southwest by evening. There will be top temperatures of 4 to 7 degrees, as well as moderate westerly breezes at first.

Patchy rain and sleet will extend eastwards over the southern half of the country tonight clearing in most places before dawn.

Further north, scattered wintry showers will continue for a time, before retreating to northwestern areas overnight. It will be a cold night countrywide, with lows ranging from minus 2 degrees to 1 degree, leading to a sharp frost and icy stretches.

Winds will be mainly light westerly or northwesterly, but increasingly fresh and gusty on northwestern coasts by Thursday morning.