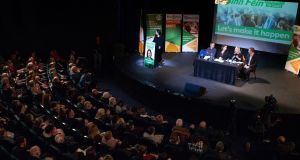 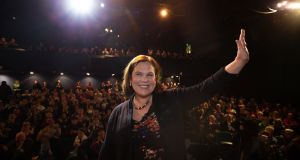 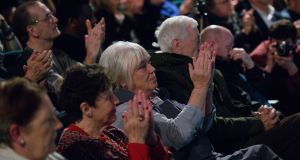 The audience at the meeting. Photograph: Tom Honan

It would be a mistake to allow Fianna Fáil and Fine Gael enter government together in the hope that it would create space for a left right divide, Sinn Féin leader Mary Lou McDonald has said.

A coalition of the two Civil War parties would not benefit “ordinary people”, she added, claiming a change is needed now.

Ms McDonald told a party meeting in Dublin on Tuesday night that some Sinn Féin supporters might accept a coalition between the Civil War parties because it would “open up space for the development of a proper left-right divide”.

However, this would mean leaving “the forces of political conservatism” in charge.

The meeting in Liberty Hall was the latest in a series of rallies being held by the party promoting the prospect of Sinn Féin entering government in the wake of the general election. A similar event will be held in Newry on Wednesday.

About 500 people attended the meeting, with a few more who could not gain access outside the venue. Those inside heard a speech by Ms McDonald and a question and answer session with TDs Louise O’Reilly, Eoin Ó Broin and Pearse Doherty, as well as Michelle O’Neill, Northern Ireland’s Deputy First Minister.

Ms McDonald claimed this month’s general election represented “a truly seismic shift in the attitude of the electorate” as Irish politics moved away from the combined dominance of Fianna Fáil and Fine Gael.

She said the two parties “have had it all their own way for 100 years” but when “now faced with this new dispensation” were trying to keep the people who voted for Sinn Féin away from government.

“Nothing will change if Fianna Fáil and Fine Gael are in government together,” she added.

The Dublin Central TD criticised Fianna Fáil and Fine Gael for not talking to her party about forming a government. Micheál Martin and Leo Varadkar have said they will not talk to Sinn Féin because of concerns they have about how Ms McDonald’s party is run, its associations with the Provisional IRA and its economic policies.

However, Ms McDonald said those who claimed Sinn Féin could sit out government and grow in opposition to a coalition of Fianna Fáil and Fine Gael are mistaken.

“Now there are some, perhaps gathered here among us, who might say ‘Sure leave them off, let them get in together and we’ll be there, we’ll be waiting for them next time around’,” she said.

“That idea actually misses the point because, yes, you see, the coming together of the forces of political conservatism into a formal coalition would open up space for the development of a proper left-right divide in Irish politics.

“But just be very clear, it would do nothing to improve now the lives of ordinary people. That’s because such a government would continue to do the same things they have always done. Sinn Féin wants to be in government and we want to deliver.”

A protest against a government including both Fianna Fáil and Fine Gael is being planned by some on the left for March 7th, two days after the Dáil next attempts to elect a taoiseach.

In response to a member of People Before Profit, Ms McDonald said Sinn Féin would not take part in that protest, although she said she wished those taking part well. “The focus of our work is on the negotiations with other parties. The reality is the numbers will either stand or fall within the Dáil.”

Ard Fheiseanna in Citywest will never be the same again