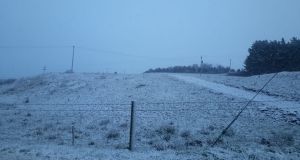 Several car crashes have occurred in Galway as drivers deal with treacherous road conditions because of snow and hail.

Crashes have happened on the M17, M6 and M18 east of Galway city which are likely to cause long tailbacks during the morning rush.

The M6 is closed westbound at J16 Loughrea due to several collisions between there and J17 Athenry.

There are two crashes on the M18 northbound between Kilternan and Rathmorrissey. The M17 has reopened between J20 and J19 Annagh Hill after a crash there.

Road conditions were slippery in parts of Donegal, Sligo and Roscommon after snow and hail showers. It was also frosty around Tullamore in Offaly.

A status yellow snow and ice warning is in place for Connacht, Cavan and Donegal until 11am on Monday.

Met Éireann forecaster Joanna Donnelly said it is “extremely cold” along the western seaboard with the prospect of showers of sleet, snow and hail mixed.

There will also be rumbles of thunder and accumulations of snow over high ground which might also settle in low-lying areas.

“The snow will fall down to lower levels as well,” she said.

On Monday night temperatures will fall to minus 1 degrees and it will be cold on Tuesday with highs of just 7 degrees. The forecast is for milder conditions to return during the middle of the week.