Sligo looks to future in wake of shop closures 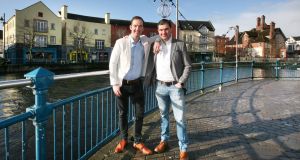 Even as they were polishing the boardroom table in Sligo’s Institute of Technology in preparation for today’s much anticipated Cabinet meeting, news broke that the clothing store Next is to pull out of the town.

The news comes just weeks after Tiger, a neighbour of Next in the Quayside shopping centre, closed. They are not alone, one in five shops in the town are shuttered.

Nearly three-quarters of them have been closed for over three years. The picture seems bleak. Sligo has the lowest growth in jobs in the country – just 2.2 per cent, far behind the national average of 11 per cent.

The numbers are sobering, says Dr John Pender of Sligo’s Institute of Technology. Nearly one-in-four people in the Border region, which includes Sligo, are at risk of consistent poverty, living on on less than 60 per cent of the average industrial wage.

Dr Brendan McCormack, the president of IT Sligo who will host Taoiseach Leo Varadkar on Friday, wants to increase student numbers from 6,000 to 10,000 and to acquire that coveted “Technological University” status.

Students who go to Dublin end up staying there, or “then maybe move to Budapest and Berlin”, he argues. The northwest is haemorrhaging 17 and 18 year olds , with 55 per cent of Leaving Cert students leaving to study elsewhere.

With Dublin struggling with soaring property prices, exorbitant rent, and bumper-to-bumper traffic, he sighs at news that payment services company, Stripe is expanding its Dublin office.

“They could come down to my backyard and look out on to Ben Bulben and Knocknarea and work just as easily from here” he points out. But multinationals require good roads and top-quality broadband.

In addition, much of N17 Sligo/Galway road is “a dirt track” for much of its route, while there has been no scheduled flights between Sligo airport and Dublin since 2011.

Today, however, the upgrading of the N4, notorious for the lethal stretch between Collooney and Castlebaldwin which has claimed 30 lives, is apparently copperfastened in the National Plan.

Most importantly, Sligo is set to be designated as capital of the northwest. Some hope for official “city” status. But locals are cynical about strategies and frameworks.

“All Sligo got out of its gateway status was a sign at the entrance to the town,” says Keith Moran, managing director of SL Controls, one of Sligo’s success stories. Despite that, one businessman, Fergal Quinn senses optimism in the air.

Many agree. He and his brother, Kevin, who own a number of pubs, a restaurant and the Lola Montez nightclub,set up the Hen and Stag Sligo operation a few years ago after a slump in business.

Today, as Bloomberg admiringly reported last year, it brings €4 million to the town. “Next is a body blow,” Quinn said, but he does not blame high rents, as others do.

With so many empty units, landlords cannot be unrealistic, he feels. For him the threat is Brexit and fluctuating exchange rates. Last year, two-thirds of Hen and Stag Sligo business came from NI, “but it’s less than 50 per cent now”, he says.

Finbarr Filan, brother of former Westlife star Shane, decided to campaign when he found that the first mention of Sligo came only on the 130th page of the 151 page-long draft National Planning Framework.

Together with local agencies such as the county council, the chamber of commerce, the North West Regional Assembly and Sligo Tourism, BID fought back.

It has hired a tourism manager to exploit Sligo’s surfing culture, its stunning scenery and its concentration of artists and artistic institutions, such as the Model arts centre, the Hawks Well theatre and the legacy of William Butler Yeats.

Local politicians, such as Sligo Leitrim TD Tony McLoughlin, fought back hard when they realised that the draft national plan included no regional capital north of the line between Galway and Dublin. McLaughlin was furious that such a document “could be even released in the first place”.

The problem with the 2002 national plan was that “there was a little bit for everyone in the audience”, says county council chief executive Ciaran Hayes. In the end, nobody got very much.

Now Sligo has “the guts of €200 million” coming for capital projects that could open up significant swathes of land for development, he argues. Life can be better beneath the shade of Ben Bulben.